The Roux House for Lunch with some Friends

My favorite novelty about being downtown for work these days is all of the lunch hot spots that are available within a very short walking distance.  Recently I received a phone call from Justin Ulrich, a former grad school colleague, who was hoping to meet up for some grub after he did a little research for his dissertation at some of the governmental offices.  Not being one to turn down good company for feasting, I easily obliged.  At pretty much the same time that Justin contacted me, I was also propositioned for doing lunch with Eric, Kevin, and Shawn.  I saw no reason why we couldn't all five dine together, so I told them to head downtown to join up with Justin and me.

Justin and I walked around downtown for a little bit to see what the local restaurants had to offer.  It was a beautiful day so we decided that it would be wise to find somewhere that we could sit outside and enjoy the sunshine.  While it is best known for being a bar at night, the Roux House on Third Street offers up some pretty decent lunches at fair prices with both inside and outside seating.  Our mind was made up, and we grabbed a table in the courtyard area. 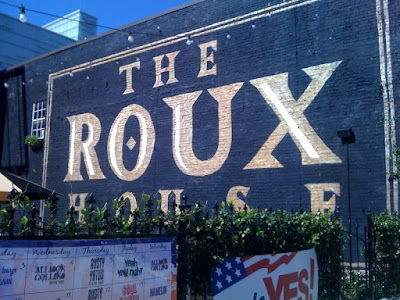 The Roux House Courtyard and Wall

The special on this magnificent Monday was Shrimp Acadiana.  For those who may not know, a typical "Acadiana" dish features something smothered in crawfish etoufee.  It is much like rice and gravy with some sort of smothered meat like a pork chop, but instead of rice and gravy it has rice and crawfish etoufee.  Usually the meat in an Acadiana dish is some sort of fried seafood like catfish or, in this case, shrimp! 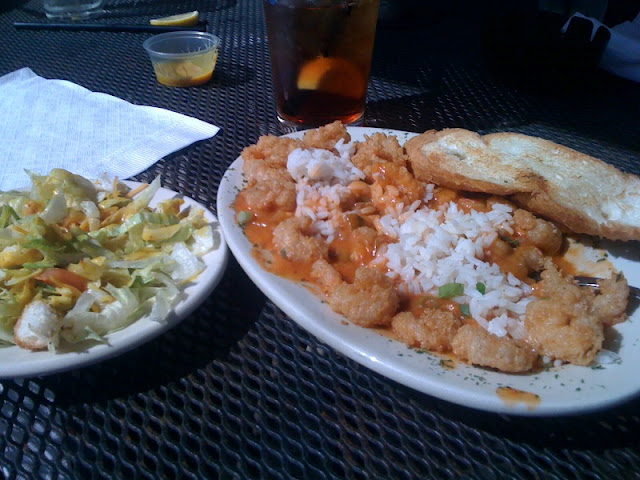 To start with, I had a side salad with honey mustard dressing.  The rabbit food was a slightly above average side salad and certainly gave my diet a little much needed roughage.  The honey mustard itself was top notch, but surely something that came in a prepackaged bottle.  The Shrimp Acadiana had a great flavor to it.  The fried shrimp formed a ring around the outside of the plate while the crawfish etoufee sat nicely in the middle.  The shrimp themselves were spicy and flavorful, though a little smaller than I would have liked.  Although, given their size, the Roux House did make up for it with quantity.  There were enough shrimp for nearly every bite to have a fried shrimp and a fork full of Cajun goodness.

I truly enjoyed the company for a downtown lunch as well as the food.  I've come to really be a fan of guests for lunch, experiencing new restaurants and items, and showing other people dishes at places they've never been before.  A lot of people around Baton Rouge don't even know the Roux House is open for lunch.  That, my friends, is a mistake because you really ought to give it a try!