Wine and Appetizers at Enoteca Marcello

The Baton Rouge restaurant scene has come alive in recent years with an influx of original Louisiana establishments including some places that are unique to the Red Stick alone.  One such restaurant that got its start in Lafayette and has recently moved into the Baton Rouge market is Enoteca Marcello Wine Bar and Cafe in the Southdowns shopping center.  I recently visited Marcello's with my friend Stephanie to check out the bar and order a couple of appetizers. 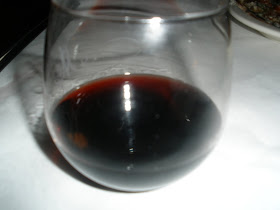 One of My Several Glasses of Sangiovese

The wine list is not excessively extensive but it certainly seems to be good.  They had a mix of California wines to go with quite a few European varietals.  Stephanie found a Barbera from Italy that she absolutely loved.  I drank both glasses of Sangiovese that they had on their list and each one was sensational.  Ever since we sang "Sangiovese" as a song in Napa I've had a thirst for the black Italian grape which I try to quench every chance I get. 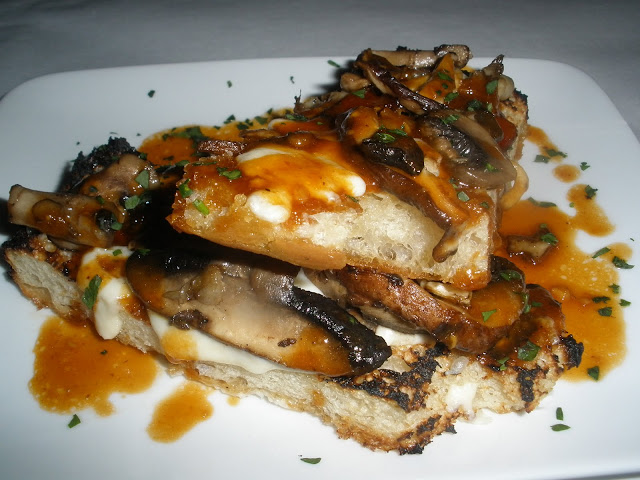 Wild Mushrooms and Cheese on Focaccia at Enoteca Marcello

We were able to call Mike out of the kitchen and talk to him about some of the delectable food options at Marcello's.  He sent a couple appetizers our way that were absolutely sensational.  First we enjoyed an off menu wild mushroom and cheese mixture on roasted focaccia bread.  The bread itself was fresh and toasted to a nice crispy outside while retaining its soft and moist nature on the inside.  Multiple wild mushrooms and fine cheese with a rich mushroom sauce were generously spread over the focaccia.  This dish was incredibly flavorful and wonderful on the palate.  The many different tastes and textures combined to make a tremendous appetizer that Stephanie and I scarfed down with great glee. 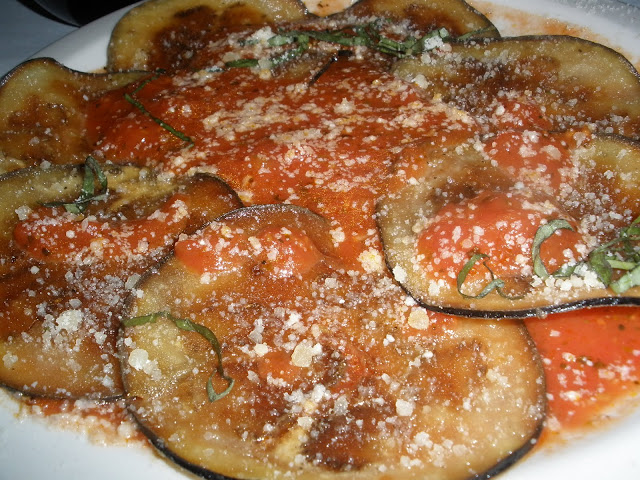 The second appetizer that Mike sent out to our table was one from the menu.  It contained very thinly sliced eggplant that was lightly battered and fried then topped with marinara sauce.  The Melanzane Fritti was a delicious rendition of an eggplant dish that was fried just long enough to give it a crispy exterior while leaving the inner part of the wheel with a soft and delicate texture.  Marinara sauce was a perfect compliment, and the dish was certainly worth a try, especially for eggplant lovers! 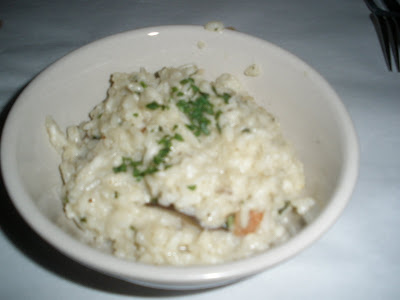 Finally, amongst more glasses of vino, we ordered a side of the chef's daily risotto.  Wild mushrooms seemed to the be the theme of the night as the risotto special also featured the feasting fungi.  While I imagine risotto is not very popular in south Louisiana because of all the other rice dishes that we create such as jambalaya, rice and gravy, red beans and rice, gumbo with rice, crawfish etoufee over rice, etc., it was really good to sample a dish that I had heard so much about and seen so often on all the nationally televised cooking shows.  The short grained rice was well seasoned and nearly creamy in texture while still retaining the properties of each individual grain.  Risotto is an interesting dish that can be cooked with limitless flavors so I'll be looking forward to trying more in the future.

I left Enoteca Marcello feeling very satisfied with the wine, the food, and the company.  I want to thank Mike for bringing out a couple of fantastic appetizers for Stephanie and I to dine on.  I'll definitely be back again to try some more cuisine and consume more fantastic wines.  I highly recommend a visit to Marcello's to anybody.  Take a seat in the bar area and enjoy the atmosphere, some great food, and few glasses of wine.  You can thank me later.