There are several good places in Baton Rouge to find fried chicken other than Popeye's.  Undoubtedly one of the best of these places is Delpit's Chicken Shack on N. Acadian.  The Chicken Shack serves up hot lunches to many satisfied patrons every day as they have quite a few offerings on the menu, but their specialty is the bone-in, finger-licking fried chicken. 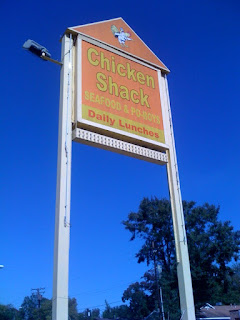 I recently visited the Chicken Shack for my first time after strong recommendations from Eusebio and Eric.  The lovely Caroline met me there for lunch to help me see what all the fuss was about.  We got things started with an order of the "shack balls."  These hand-battered boudin balls were unlike the other deep-fried Cajun treats that you can find around town.  The each ball contained the flavorful rice and meat mixture that remained extremely moist inside.  The shack balls impressed me a lot, so I couldn't wait for the chicken! 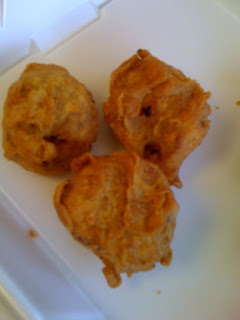 The fried chicken dinner came in a styrofoam box with couple of sides and a roll.  I ordered a three piece meal of all dark meat and picked cornbread dressing with brown gravy and yams as my side items, which may have been a decent call, but they weren't anything too special.  Fortunately for me, they were better than the two sides that Caroline got so at least I can brag about that!  Both of my sides were plenty good enough to eat, just not good enough to bring people to Chicken Shack on their own.  The chicken, on the other hand, is a different story! 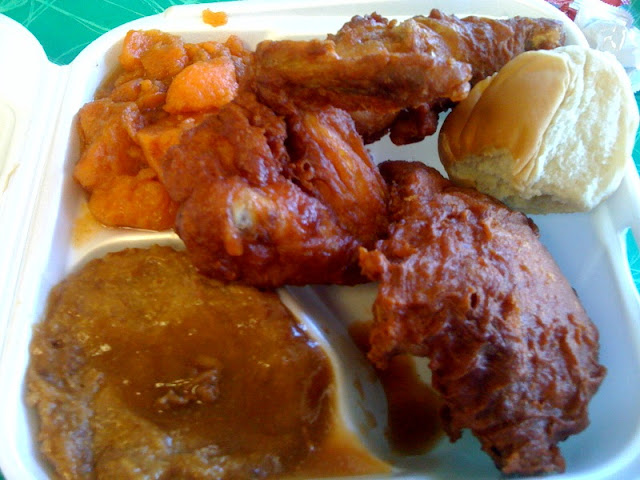 Seasoned well, fried crunchy on the outside, and juicy on the inside, this chicken could soundly be argued to be the best fried bird in town.  It was absolutely delicious from the first bite of crispy skin to the final nibble of tender flesh off the bone.  Each bite made me want to order more to eat until I couldn't stuff any more down my throat, then go back for more the next day!  I resisted the temptation though.  But don't worry, I'll be back soon enough.