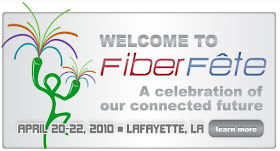 Fiber Fete kicked off this afternoon in Lafayette, Louisiana and I am excited to be a part of it.  The event is designed to be a meeting of the minds about our "connected future" where we will have speakers and discussions about the future of high speed broadband access.  Included in these talks will be a conversation about what can be done with the new and innovative fiber-to-the-home network in Lafayette that serves as a beacon of technology on a global level.  While I am attending the three day event to focus on the connection between broadband and health care, for the purposes of this blog I made sure to also examine the bites and boozes, which were plentiful and fantastic! 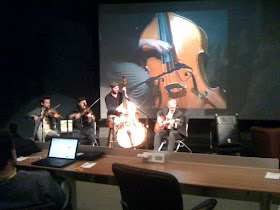 The "Fiber Fete Quartet" Played Some Cajun Tunes
Fiber Fete is being held at LITE, the Louisiana Immersive Technology Enterprise center, which has been built to help drive digital and technological economic development in Lafayette.  Tuesday's kickoff included comments from Mayor Joey Durel, Louisiana Economic Development Director Stephen Moret, and some other influential people in Lafayette's rise to prominence in fiber networks.  Secretary Moret claimed that Louisiana  will be a leader in digital technology, and after seeing him take the Louisiana film industry from non-existent to third in the nation in just seven years, I don't doubt him.
Alright, enough about that, how about some food? 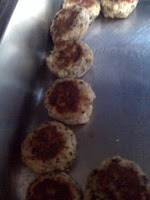 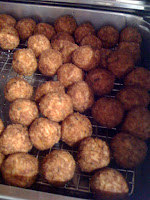 Crab Cakes and Crawfish Boudin Balls
The post-speaker reception featured a great collection of finger foods with Cajun flare for the guests from around the country to enjoy. Pictured above are some mini crab cakes and a batch of crawfish boudin balls. Neither impressed me all that much being from Louisiana and eating this cuisine all the time, but they were certainly tasty.  I'd give the slight edge to the crab cakes out of the two. 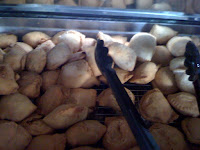 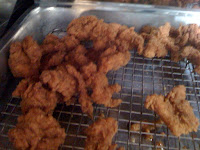 Crawfish Pies and Fried Alligator
Fiber Fete also had some international guests, though many other European invitees were unable to make it because of flight cancellations due to volcanic ash.  I guess not even home-to-home fiber networks can stop Mother Nature!  Still, that didn't stop those of us who did attend from eating crawfish pies and fried alligator.  Both of these dishes were superior to the first two.  The alligator in particular was some of the best fried gator I've ever had! 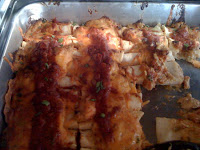 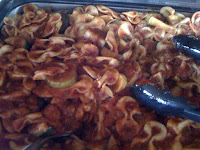 Crawfish Enchiladas and Veggie Pastalaya
Two other dishes that I thought had some promise were the crawfish enchiladas and vegetable pastalaya.  The enchiladas featured even more crawfish, which I though ended up being a little bit of an overkill.  I didn't need crawfish boudin balls, crawfish pies, and crawfish enchiladas.  While I do love crawfish, I also love shrimp.  Just sayin'.  Oh, and I didn't try the pastalaya.  If you are confused, pastalaya is a term for a Cajun jambalaya that is cooked with pasta instead of rice.  First, a veggie jambalaya is about the dumbest thing I've ever heard.  Just call that rice with vegetables and stir-fry it!  Second, this didn't remind me one bit of jambalaya or even pastalaya.  I was really just a vegetarian pasta dish that they tried to give a Louisiana name.  For shame. 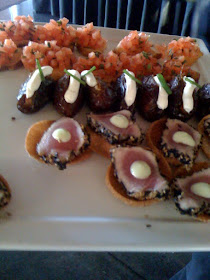 Seared Tuna and Andouille Sausage Stuffed Dates
The highlight of the appetizer selections came from the platters that Prejean's, the restaurant that catered the event, had their staff carry around.  The above spread feature bite-sized morsels that might have been my favorite treats of the evening other than perhaps the fried alligator.  The sesame crusted seared tuna was masterfully prepared and topped with a bit of a wasabi based sauce.  The tuna melted in my mouth while the wasabi added a hint of spice and flare to the dish.  But, as good as the tuna was, the winner of the entire evening came in the form of the andouille sausage stuffed dates that were topped with goat cheese.  These dried plums were sliced down the middle and loaded with a seasoned sausage before being topped with a strip of soft, creamy goat cheese. The flavors blended together in an inspired harmony and proved that you could bring such different things together for the common good.  Okay, maybe I'm stretching too far to make an analogy to Fiber Fete, but still, it was damn good! 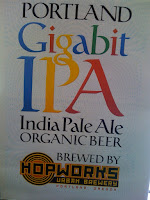 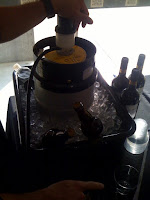 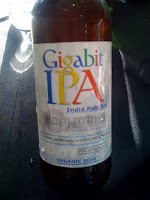 Gigabit IPA from the Hopworks Urban Brewery in Portland, Oregon
The City of Portland, Oregon sent an offering of craft-brewed beer to Fiber Fete in order to congratulate the city on the success of its fiber network.  The Gigabit IPA was named as a response to Google's program to select a city in which to implement a similar fiber network as a pilot for future infrastructure initiatives from the website giant.  The organic ale tasted smooth and hoppy.  It left a clean aftertaste compared to many Cascade-hopped IPAs, which I really enjoyed as it tasted like a great pale ale while still being refreshing.  I'll take any shipments of beer from Portland that they'll send, so I was happy to indulge!  Feel free to send me more, Hopworks.  Just message me for a shipping address! 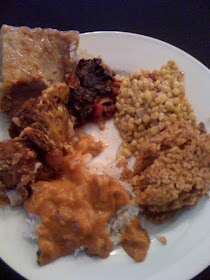 Festive Louisiana Dinner
The opening evening of Fiber Fete concluded with a festive Louisiana dinner, more cocktails, and quite a bit of mingling, connecting, discussing, and imagining.  I was able to have quite a few conversations with industry leaders about health care and broadband, and of course the conversation also shifted to food blogging, barbeque, Cajun food, and southern hospitality.  The dinner feature some eggplant, seasoned corn, real jambalaya, and crawfish etoufee.  Highlighting the plate were some stuffed and bacon wrapped fried shrimp and a heaping serving of bread pudding.  The shrimp were insanely good.  The jumbo Gulf shrimp that I had been craving earlier were stuffed with cheeses and other spicy treats, then wrapped in bacon, battered, and deep fried until the inside melted together while the outside turned crispy.  What a sensational shrimp.  I'll certainly give props to Prejean's for that one!
Here's to great people, visionary leadership, wonderful food, delicious craft beer, and looking forward to day two of Fiber Fete, which you can read about here!