On the final weekend of March, Travis, Eusebio, and I competed in the Smokin' Blues 'n BBQ Challenge in Hammond, La.  We entered the Kansas City Barbeque Society (KCBS) sanctioned event, which means we were cooking against the big dogs.  Johnny Trigg from the TLC show Barbeque Pitmasters was there, as well as QUAU and Pellet Envy, the first and third ranked BBQ teams in the country according to KCBS.  It turns out that of the 50 teams doing competitive barbeque, we were the ONLY rookie team and seemingly the only team with chefs under the age of 40.  In fact, we are all 30 or younger, and every other team appeared to be full of wily veterans in their 50s and 60s.  We knew we were going to have our hands full to just not finish last in each category.
In KCBS contests, each team must enter all four meat categories: chicken, pork ribs, pork butt, and brisket.  Teams must have their meat inspected the day before the competition to ensure they were not pre-marinated, and then they have until noon the next day to prepare and cook the meats.  As with any true barbeque, the preferred cooking method is low and slow.  Barbeque pits infuse the meats with delicious smoky flavors while cooking them for a long time at a low temperature, leaving the finished product flavorful and tender. 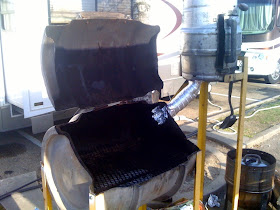 The Monstrosity: Third Row Tailgaters' Famous BBQ Pit and Smoker
For the majority of our cooking, we used the Third Row barbeque pit and smoker, which has been dubbed "The Monstrosity."  We hand-crafted this pit back in 2002 or 2003.  It is made it an old full-barrel aluminum keg flipped on its side with a smoke stack connecting to a stainless steel keg that is used as the smoker.  It is a true thing of beauty, and I think easily got the most looks and brought up the most discussion of any pit in the KCBS challenge. 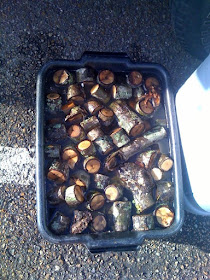 Soaking Pecan Chunks
For some extra flavor, we used pecan chunks as a smoking wood.  I find that pecan gives a nice balanced smoke that adds sweetness and smoky flavor without overpowering the meat.
I could go on with more text about the competition, but I think this video that I put together would sum it up a little better.  Enjoy!  Warning: it will make you hungry!
Thanks to Lauren for help with the video!  One thing for sure is that we had a good time.  The contest presented its challenges but was also a whole lot of fun, and we did cook some great food.  We ended up placing 39th overall, which really wasn't too bad.  On our first attempt at competitive barbeque we beat out 11 teams that had been doing this for years!  Our chicken placed 23rd, which we were pretty proud of. To cook some chicken that finished in the top half exceed our expectations of anything we could do on a first attempt.  The pork finished tied for 31st and the ribs came in 34th.  The only really sad note for us was that our brisket came in 49th.  But hey, we weren't last in anything, and we learned a lot about cooking in a KCBS contest.  I imagine we'll do it again at some point, and we'll only be better!  The barbeque circuit better look out!