Sure, it may be a little cliche... and yes, I should be above fast food (or at least writing about large fast food chains) most of the time, but how can I resist a blog post about the Double Double "Animal Style" at In-N-Out Burger?  We don't have this chain where I'm from in Louisiana.  And it isn't everywhere that you can order something "animal style."  When out west and in need of a quick bite, In-N-Out it is!

In-N-Out is a regional (California, Arizona, Nevada, and Utah) burger joint that prides itself on fresh ingredients and quality products.  They serve burgers, fries, shakes, and drinks, and are well known for doing so.  The Double Double is a two-patty two-cheese burger served with lettuce, tomato, onions, and mustard.  All In-N-Out burgers also come dressed with a special sauce that is similar to a thousand island dressing.  However, that's not exactly what I ordered.  In-N-Out also has a not-so-secret lingo and menu that offers customers a way to act like they are in the loop when they order.  I got my Double Double "Animal Style" which meant that they would grill my onions, add more sauce, and throw on some pickles.  Damn.  Pickles.  I asked that they hold those.  So basically I got some grilled onions.  I'm okay with that. 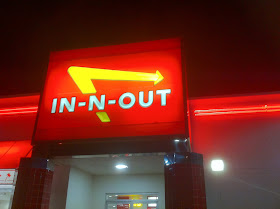 The burger itself was certainly better than par compared to similar fast service restaurants.  I'd eat that before the competition most of the competition any day.  I'd put the burger in the same category as Five Guys... which didn't impress me that much because you have to go in and its a little overpriced.  In-N-Out was inexpensive and delicious.   I'll take that every time.  Maybe it should remind me What-a-burger, of which we only have one of in Baton Rouge but I remember them fondly from the Houston area. The grilled onions were money and the sauce added just enough kick to make the burger stand out.  The fries I had were forgettable.  I ate them all but they could have been a little crispier.  They weren't bad, but I wouldn't brag about them either.  Still, when in the far Southwestern USA and in need of quality, affordable fast food, give it a try!