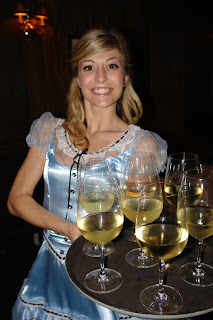 Ruffino's has an annual tradition of rolling out their own red carpet to host an Oscar Night Wine Dinner.  I received an invitation to join in on this evening of Hollywood cheer and to watch the Academy Awards in style.  Naturally, I couldn't pass that up!  We were treated to fantastic wine, a sensational dinner, and a wait staff (as well as Ruffin Rodrique himself) dressed up as a cast of characters from the movies.  I knew right away that this would be an evening worth blogging about!

The meal began with the "Mad Hatter's Tea Party".  This round of walking the carpet, clinking glasses, and finger foods got the night at Ruffino's kicked off before the Academy Awards began.  All guests were served plenty of Kim Crawford Sauvignon Blanc to go with the hors d'oeuvres.  The mild and fruity New Zealand wine proved to be an excellent choice to start the dinner and pair with the Tea Party courses.

The "Caterpillar's Mushrooms" combined crawfish and cheese to brilliantly stuff a mushroom cap.  These bite-sized appetizers delivered plenty of flavor that paired nicely with the wine.  Also served with the Tea Party were some crab meat stuffed, deep fried artichoke hearts.  Being served above by a character from "The Fighter", the stuffed artichokes were my favorite of the appetizers. Finally, the red carpet came to a close with some Tea Party sandwiches of smoked salmon and cucumber.  As inventive and interesting as they were, the sandwiches were my least favorite of the starters.  The red carpet had wrapped up and we were on to the Oscars.  My taste buds readied themselves for the rest of the show. 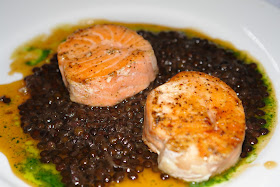 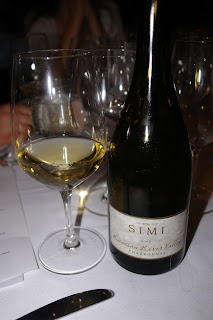 The formal dinner part of the evening began with a "King's Speech" inspired dish: King Salmon with the Crown Jewels.  The plate featured a pair of New Zealand King Salmon Roulade cooked in the trendy sous-vide style.  For those unaware of this method of cooking, in French it literally translates to "under vacuum."  The meat (or salmon in this case) is enclosed in a vacuum sealed bag then cooked in water that maintains a certain temperature.  This constant heat at a regulated and typically lower temperature than traditional cooking is said to maintain the integrity of the ingredients.  The King Salmon rolls were then placed atop Beluga lentils with roasted chicken jus and parsley puree.  The salmon turned out rich and flavorful.  The lentils underneath had plenty of texture to them, which I really liked compared to overly cooked down lentils.  Overall, this dish exceeded expectations and left a smile on my face... as did the accompanying wine.  The King's Salmon came paired with a 2007 Simi Chardonnay.  This California white wine featured some tropical fruit with oak flavors.  My first taste had notes of grapefruit and pear... but what do I know?  I can definitely say that it did not come across as an overly sweet Chardonnay, which I certainly like.  It worked for me, but I quickly prepared myself for the upcoming glasses of my preferred red wine varietals. 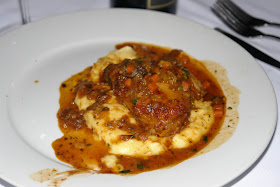 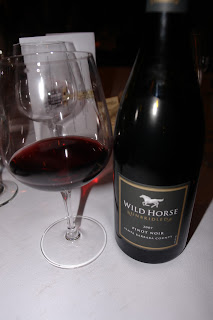 "True Grit" made an appearance at the Oscars as well as at the Ruffino's Wine Dinner.  The above plate represents the Rooster Cockburn Cacciatore with True Grits.  The free range organic chicken thighs were stewed in a San Marzano tomato, red wine, and porcini mushroom sauce and served over creamy Mascarpone polenta.  Poured along side the dish was a 2007 Wild Horse Pinot Noir from Santa Barbara.  I loved the idea of pairing chicken and polenta with red wine. The thigh itself had a great flavor but ended up just a little dry in the middle.  With the chicken being stewed I certainly wasn't expecting to be even the slightest amount dry.  Still, the moistness of the sauce and polenta made up for it and the dish as a whole worked very well.  It certainly seems a little risky to serve bone-in chicken thighs in a fine dining setting, but I'd say that the Chef Peter Sclafani managed to pull it off.  As I said earlier, I really liked the bold pairing of red wine with chicken and polenta.  The Wild House Pinot had a bold and spicy profile that I felt worked really well with the dish.  I certainly would not have been shy about going back for more if there wasn't another course already on the way. 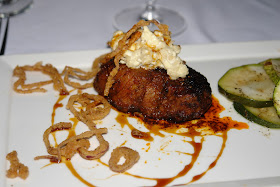 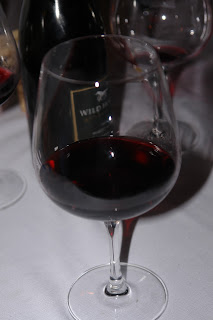 Wrapping up the entree portion of the menu, Ruffino's turned to "The Fighter".  The dish, titled "Black and Blue" Steak, onion "rings", "3 rounds" of zucchini, paired with a Reserve Cabernet Sauvignon from Robert Mondavi in Napa.  Though typical, I love beef and cab.  It is hard to go wrong.  Bold with bold.  Bring it.  Winning.  The blackened Sterling Silver filet mignon was cooked to an ideal medium rare and topped with a blue cheese glacage.  Some buttermilk battered crispy onion strings complimented the sauteed zucchini slices.  The spice rub on the steak intrigued me on first bite.  I went back for another.  I couldn't quite wrap my tongue around it.  While delicious, the blacken seasonings and blue cheese took away from the superiority of the beef.  I took another bite.  It grew on me.  I didn't love it, but I certainly wasn't opposed to it either.  Fork to mouth once again.  Well, why stop now, I thought.  Sip of wine.  Insert delicious zucchini round.  Back to the steak.  The dish fought me.  I fought back.  The spice rub may have been a bit much, and blue cheese glacage may have been over the top, but dammit, I ate every bit.  I won.  KO.  Fourth round. Ding ding ding. 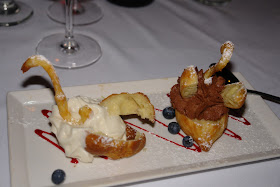 Oh, and then there was dessert.  "Black Swan" delivered the final course: swan shaped profiteroles filled with white and dark chocolate mousse, raspberry sauce, and mixed berries.  Creative, delicious, and well played.  The wine dinner managed to successfully incorporate a handful of the year's best movies into the themes of their dishes.  The swan profiteroles may have been the most direct and obvious, but there's nothing wrong with that.  The dessert came with a glass of Magnificat by Fransiscan.  The Magnificat is a red wine blend from Napa that is mostly Merlot and Cab.  While not a true dessert wine like what I would expect with a final course, the Magnificat stood tall against the swans and continued to be my beverage of choice until the Oscars went off the air.
"King's Speech" won best picture while "The Social Network" racked up its fair share of awards as well.  I'm really glad that Natalie Portman won for Best Actress.  Anybody that watched "Black Swan" and thinks somebody else should have won, please explain yourself!  I'd like to thank Ruffino's for having me as a guest at their Oscar Night Wine Dinner.  Ruffin and his crew put on a great show in the front of the house and Chef Peter provided an amazing feast to go with the entertainment.  What a night on the red carpet!
Share