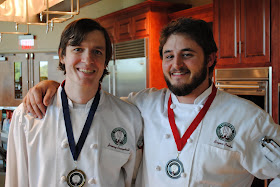 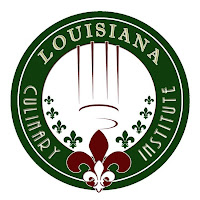 Jeremy Campbell (left) and Bryan Poche went head to head in the finals of the Louisiana Culinary Institute's Race to Cannes cooking competition.  When I judged Round 2, groups 3 and 4 earlier in the competition, I actually helped score both Jeremy and Bryan to victory.  Seeing both of them in the final got my mouth watering before I even knew what was on the menu!

The chefs knew they would be working with the three main ingredients of Louisiana Pompano, Jerusalem Artichokes, and Fresh Fennel.  However, just before the start of the competition, both chefs were given the mystery ingredients of Smoked Mussels, Raw Pecans, Crab Butter (crab roe), and Assorted Fresh and Dried Chilies.  Both chefs were tasked with incorporating all of the ingredients into either their appetizer or entrée as a full ingredient, not just a garnish.  I love the added level of difficulty for the finals!

Bryan presented what he called a "unique play on the ever popular shrimp and grits."  He was certainly right about that!  The dish featured some morsels of octopus that had been slow-cooked in a bath of tomatoes, chilies, and more.  To add a little something extra to the grits, he molded them and then coated the grits with a batter before frying them to crunchy golden exterior.  I love the extremely creative play on a popular dish, as well as the balls he had to use octopus in his dish.  Everything tasted great, and I think the chilies he had to use as a mystery ingredient added a nice touch.  The one critique that I made was that the dish looked like a bit of a monochromatic mess on the plate.  I would have liked too see a few different colors or even a green garnish to balance out all the red and orange.

Jeremy's appetizer consisted of a salad.  However, this was no ordinary salad.  Rather than fry his squid like so many others, he braised it in red wine and served it over warm Arugula tossed with lemon and black pepper vinaigrette.  He also added some pecans in order to use a mystery ingredient and provide a little extra crunch.  Each bite of the salad left me thoroughly impressed.  The fact that the Arugula was served warm and slightly wilted added to the unique factor.  Still, the highlight of the dish easily came from the beautifully cooked squid with that gorgeous purple color after it had been braised in red wine.  Compliments to the chef, for sure!

My highest rated dish came from the plate of food that I would have most likely ordered again... or tried to cook for myself.  Bryan described his inspiration as taking two things he loved and putting one inside the other.  And why not put a crab cake inside a piece of fried fish??  He topped the expertly fried Pompano, which isn't usually a frying fish due to its oily nature, with a mixture of artichoke, sun-dried tomatoes, spinach, and pepper jack cheese.  The colors in the entree worked far better than they did in his appetizer.  However, the sunchoke gratin left a little to be desired.  It tasted slightly undercooked and a little bland, but still managed to be pretty good.  To wrap up the plate, the braised fennel that Bryan served had to have been the best fennel I've ever had.  The texture, color, and taste were all spot-on.  The dish as a whole really impressed both my eyes and taste buds!

Our final dish came from Jeremy and it packed some heat.  He plated a pompano bouillabaisse which featured fresh pompano simmered in white wine, sherry and tomatoes served over Louisiana popcorn rice.  The broth also included some chilies and smoked mussels from the mystery ingredients that added a really unique flavoring to the bouillabaisse.  Adding even more complexity to the stock, Jeremy added some brown sugar to round out the smokiness and heat.  Everything tasted spectacularly rich and it became difficult to put the fork down.  I would have liked to see some contrasting texture, but other than that, this dish proved to be a serious winner.

In fact, it did carry Jeremy on to the victory.  Scores as whole were extremely close, but Jeremy pulled out the win, and with it a trip to be part of the culinary team at the Cannes Film Festival in France.  I'd like to congratulate both Jeremy and Bryan on a job well done.  The Race to Cannes is a fantastic culinary competition and I can see plenty growth in its future.  To learn more about everything going on at the Louisiana Culinary Institute, check out their website at www.louisianaculinary.com!
Share