Big Boy Spaghetti and Meatballs caught my eye the moment I opened Emeril Lagasse's new cookbook Sizzling Skillets and Other One-Pot Wonders.  Knowing that I'd be blogging about at least nine of the recipes as part of the promotion, I had a good feeling that the meatballs would eventually make their way onto Bite and Booze.  Hey, there was red wine in the sauce after all!  After securing the ingredients I needed from Calandro's Supermarket I took to my kitchen to make some meatballs. 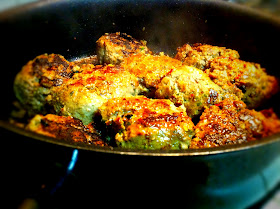 The balls themselves included ground beef, Italian sausage, parsley, Parmesan, garlic, salt, pepper and some buttermilk-soaked bread.  After mixing all the ingredients together I formed them into balls and stuck it in the refrigerator to help them take shape.  From there it was straight to a hot skillet with olive oil to brown off the meatballs followed by building the flavors in the sauce. 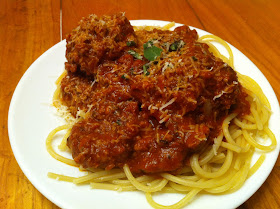 The sauce came out highly acidic but Emeril had a cure for that.  In his recipe he notes that if the sauce is too acidic you should add some evaporated milk.  I ended up adding about half a can, not two tablespoons, but it certainly did the trick.  The sauce worked out pretty well and meatballs were definitely enjoyable.  I could definitely see doing some different takes on this recipe in the future!
Share