For my second recipe based on Emeril's Sizzling Skillets and Other One-Pot Wonders (my first posted featured deep dish pizza!), I decided to make a perfect recipe for the Bite and Booze side of me: Red Wine and Port Braised Short Ribs.  Braising is a classic French technique that usually takes a cheaper and not-so-tender cut of meat and simmers it at a reasonably low temperature for a long time until a lot of the fat and connective tissue has broken down, leaving you with fork-tender protein.  One of the keys of braising is definitely to have a a flavorful liquid that will impart layers and depth of tastes as you cook.  For this recipe I once again started at Calandro's Supermarket where I stocked up on supplies including shallots, turnips, herbs and, of course, Port! 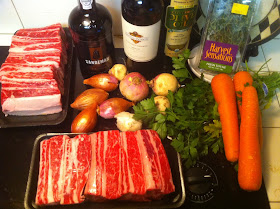 The next step to cooking this kind of meal is to take care of the mise en place.  The French culinary term literally means "everything in place".  Basically it means you get all of the ingredients out and prepared before you start cooking.  For me, that meant to peel and chop the carrots, shallots and turnips, measure out some flour, garlic and black peppercorns, and be ready to rock.  Since the recipe called for beef stock and I didn't have any homemade stock on hand, I picked up some of Emeril's beef stock at Calandro's.  I figured that's probably what he would have wanted! 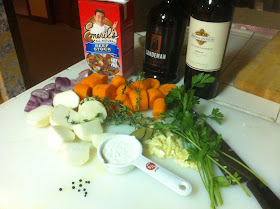 After seasoning the beef short ribs with salt and pepper and then browning them in a cast iron pot with some olive oil, the next step involved flavoring my braising liquid.  I cooked down the vegetables with a little more olive oil until they started to caramelize and then I added the flour.  After letting it toast and begin to stick to the bottom, I deglazed the pot with red wine and let that cook down a little more.  I soon added the thyme, bay leaves, parsley and whole peppercorns followed by the Port and beef stock.  After coming up to a boil, I had a very flavorful braising liquid that I knew would work extremely well with the short ribs. 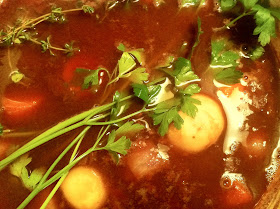 Once the liquid got to that rolling boil I removed it from the stove and add the the short ribs back to the pot. I got them all as submerged as possible and then transferred everything to the oven where I let it sit for about 2 and a half more hours.  I opened it up once to mix the ribs around and then removed the lid for the final time.  The fragrance from the pot filled the entire house and I knew that this would be an amazing meal.  However, the work hadn't quite finished there.  I first needed to strain the liquid to remove the herb stems and bay leaves.  I separated the vegetables and beef as well in order to get a gravy left in the pot.  After letting it simmer for a little while longer, the remaining liquid coated the back of a spoon and I returned the beef and veggies to the pot one more time so they could soak up more flavor and come back up to temperature.  I also used that time to make a batch of yellow corn grits to serve the ribs over! 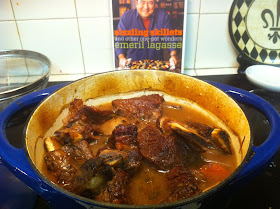 The final product: an extremely tender and flavor-packed beef short rib served over yellow corn grits with carrots and turnips.  I couldn't be happier! 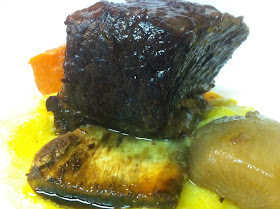 For doing these blog posts from Emeril's new book I received a free advance copy.  It is available in stores in late September.  I'll also be giving away a copy of the book in an upcoming blog post, so stay tuned to see if you can win one!  Also of note, this recipe actually called for parsnips instead of carrots but I couldn't find any.  Carrots worked very well though!
Share