Having been on a Gordon Ramsay reality show, I found it a little absurd that I had never actually been in charge of cooking a risotto before this dish.  Sure I had seen them done before on TV and even in person, but I had never actually be responsible for ladling the broth into the rice with precision.  When I saw the Shrimp and Asparagus Risotto recipe in Emeril Lagasse's new book Sizzling Skillets and Other One-Pot Wonders, I got excited about giving it a try! 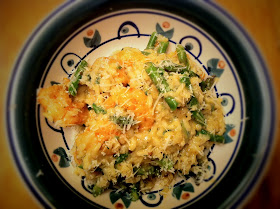 I set my sights on a creamy rice with deliciously seasoned Gulf shrimp in hopes that this would be a meal to remember.  Like all the recipes for Emeril's Blogger Party, this one again started with a trip my locally owned Calandro's Supermarket to stock up on fresh produce, Gulf shrimp, specialty ingredients, and even some wine. 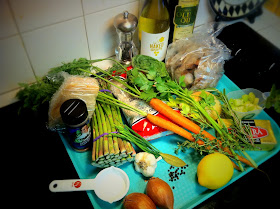 The first step after the mise en place was to peel and devein the shrimp.  After that I retained the peels to make a shrimp stock.  The peels were cooked off in a little olive oil and then I added water, onions, carrots, parsley, celery, salt and whole peppercorns.  Once the stock came together I strained it and then put it back in a pot to keep warm.  A flavorful stock is the key to a wonderful risotto as all of that flavor will transfer into the rice! 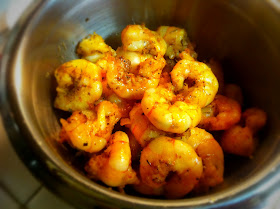 The shrimp were seasoned with Emeril's Original Essence and a little extra salt then sauteed in butter and reserved for later. 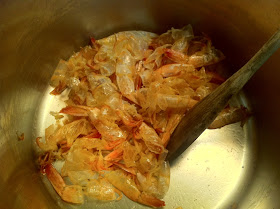 I started the rice in the pot after I cooked down some shallots and garlic in a little butter.  I let the rice toast for a bit before pouring in some wine.  The rice soaked up the wine quickly and then I began to ladle in stock a cup at a time and allowing it to absorb before adding in more. 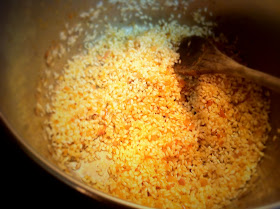 Towards the end I added in some finely chopped basil, thyme and chives as well as some lemon zest and juice.  The rice had a wonderful nearly creamy texture and an amazing flavor from all the layers of deliciousness that were added throughout the process. 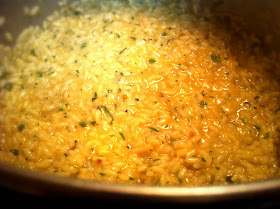 Once the rice was ready I added in the blanched asparagus and shrimp and let everything cook a little more until the shrimp and asparagus were brought up to temperature.  To serve I added a generous portion of freshly grated Parmesan cheese over the top.  The end result looked stunning and tasted even better.  I'd have to say that I am pretty proud of my first ever risotto! 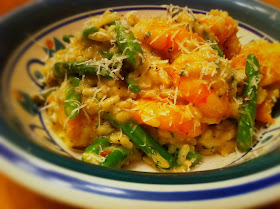 Stay tuned to Bite and Booze because on my next post I'll giving you a recipe for a Tuscan White Bean Soup and a chance to win one of Emeril's new cookbooks: Sizzling Skillets and other One-Pot Wonders!
Share