Excited to change up the style of one-pot wonders from Emeril's new cookbook, I turned the page to a recipe that caught my eye: chorizo and potato quesadillas with cilantro-chile crema.  The recipe seemed simple, straight forward, and delicious, so I knew I ought to give it a try! 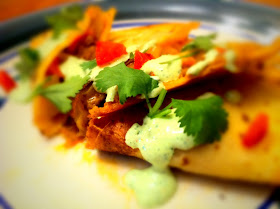 Step one, like always, started with a trip with Calandro's Supermarket at the corner of Perkins and Seigen in Baton Rouge.  I found everything that I needed and more... except one thing: chorizo.  Calandro's had some smoked chorizo but I needed the fresh stuff to take out of its casing (or never put it in one). 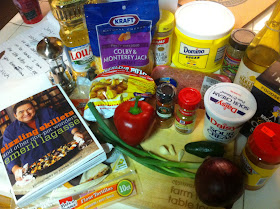 Fortunately I remembered the leisure class I took on sausage making at the Louisiana Culinary Institute.  Chef Dave Tiner provided us with a homemade chorizo recipe.  I picked up some smoked paprika and got the butcher to grind some pork for me.  I knew I'd have the rest of the ingredients at my house already.  I put some white wine, salt, pepper, paprika, cumin, oregano, granulated garlic, sugar and cayenne in a mixing bowl.  After whisking it all together I added a pound of ground pork and mixed all of the seasonings into it.  Boom!  Chorizo! 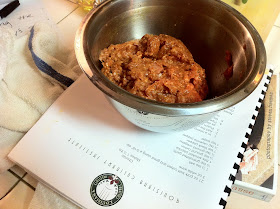 After I let the ground pork marinate in the chorizo seasonings for a little while I put it in a skillet to brown it off.  Once sufficiently cooked I added the red onions and then some diced fingerling potatoes that I had previously parboiled.  The mixture needed a little extra salt and pepper, but other than that is tasted sensational. 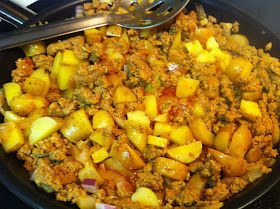 I also made a cilantro-chile crema to go with the quesadillas.  Emeril called it the "icing on this cake," it it wasn't hard to see why.  In a food processor I combined sour cream, cilantro, a minced jalapeno, three garlic cloves, some green onions, a little cayenne and a little salt.  After blending for a few minutes, I had a delicious spicy yet refreshing crema! 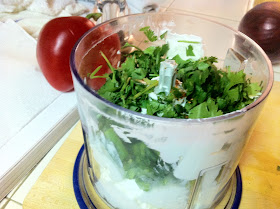 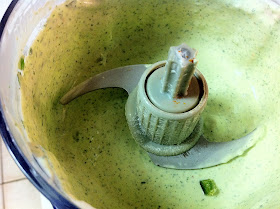 Once the crema took its place on the assembly line I turned my attention to the quesadillas.  I melted a little butter in a skillet and laid a tortilla down on it.  I then loaded one side with the chorizo-red onion-potato mixture followed by some chopped red bell pepper and a generous portion of cheese.  Once the tortilla did its job toasting in the butter, I folded it over into the melty cheese. 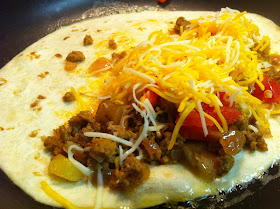 The end result, especially when drizzled with the cilantro-chile crema, turned out to be fairly spectacular.  The quesadillas provided a great balance of spicy and savory with a combination of textures from creamy to crunchy.  All in all, this recipe was most definitely a success! 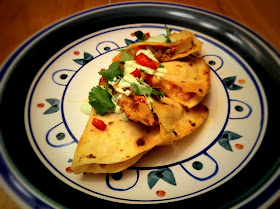