In an effort to get back on track after my not-so-successful Tuscan white bean soup, I decided to tackle some American comfort food once again with a Southern staple: Chicken and Dumplings.  I had never previously made dumplings although it turned out to be pretty similar to biscuits in the whole scheme of things (at least the dough making part).  As for the chicken, well, it was pretty standard... and very delicious. 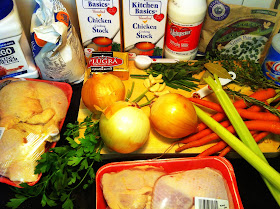 After getting all of my ingredients from Calandro's Supermarket in place I began to get the stock going.  I submerged the chicken quarters in chicken stock (I've got to start making my own!) and water and added aromatics such as onion, celery, carrot, peppercorns, thyme, and parsley. 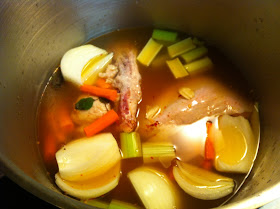 Once the stock came to a rolling boil I lowered it to simmer and turned my attention to the dumplings.  Some flour, salt, baking powder and chopped herbs were mixed together with vegetable shortening and then even more so with whole milk.  After that I kneaded the dough and cut it into thirds. 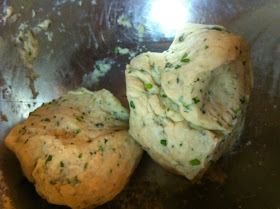 From there the dumplings had to be rolled out fairly thin and then sliced.  I'm sure this could have been done in a pasta machine almost as easily but I did it with an old-fashioned rolling pin.  Once I got the dough flattened out I cut into squares and rectangles and then moved them to the refrigerator until it was time to drop them in the boiling broth. 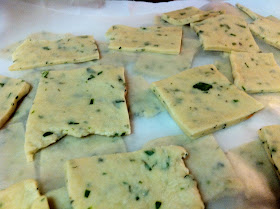 The stock had to go through a straining process.  The chicken was also removed.  Fat, skin and bones were discarded and then I waited to drop it back in.  I got a fresh batch of carrots, onion and celery ready to go before adding my strained stock back to the pot.  Once that got to a boil I added my dumplings.  A little later I added the chicken back along with the peas and then left everything to simmer for a little while. 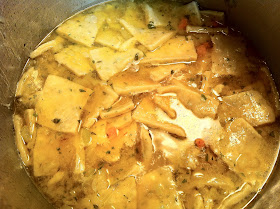 My dumplings finished really nicely, plumping up into a chewy flavorful pillow of dough.  The chicken came out beyond fork tender and full of flavor.  I added a little heat to mine because I like food a little on the spicy side, but other than this recipe was right on the money.  I think I've cooked about all the stocks and soups and such that I can handle for now though.  The next recipes I make from Emeril Lagasse's Sizzing Skillets and Other One-Pot Wonders will be a little different! 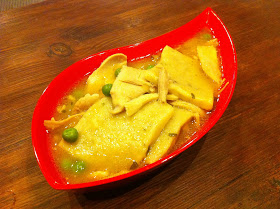 Oh, and see that serving dish featured above?  Stay tuned to an upcoming blog post because you're going to get a chance to win a set of them!
Share