As part of the promotion that I'm doing with Virtual Potluck, Bob's Red Mill and the California Olive Ranch sent each of the bloggers some special grains and oils in order to help us come with some healthy dishes to kick off 2012.  You can go back and take a look at my appetizer and side dish, but now it is time to get on to the main event!  I needed to make use of Bob's Grande Whole Grains as well as the Miller's Blend olive oil.  I also had access to my Harb's Oasis herb garden, some chicken thighs, and my own homemade BBQ sauce.  Plus, as an added bonus, I recently received a sample of DJ Paul's (yes, the DJ Paul from Three 6 Mafia!) BBQ rub.  This chicken and whole grains had met its match! 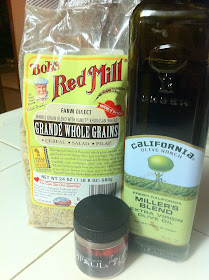 The basic preparation shook down like this:
A few hours before I was ready to start cooking I put 8 chicken thighs in a brine of apple cider vinegar, Tin Roof Amber Ale, a chopped onion, and some of my homemade Bite and Booze BBQ Sauce.  They then went back into the refrigerator until I was ready to cook.

The whole grains needed to boil and simmer for a while to absorb enough moisture.  I added 1 cup of grains and 2 and half cups of water to a sauce pan and placed it over high heat.  I also threw in a pinch of kosher salt, a couple turns of my black pepper mill, a dash of cayenne, and about a teaspoon of dried thyme that I had previously cut from my herb harden.  After coming to a boil, I covered the pot and reduced the heat to simmer for nearly an hour.

The 8 chicken thighs were removed from the brine, patted down with a paper towel, drizzled lightly with Miller's Blend olive oil, and placed in a large hotel pan (any baking dish would work).  With the skin side up, I sprinkled DJ Paul's BBQ rub on each thigh to liberally coat the skin.  The thighs were then placed in a 350 degree oven for about 30 minutes.  After the half hour, I took the chicken out of the oven, brushed each thigh with BBQ sauce, and then returned them to the oven for another 15 minutes.

After everything was ready, I plated the dish by placing a large serving spoon of whole grains on the plate, then topping that with a chicken thigh.  I garnished with a sprig of tried thyme to give the entree a more rustic look that worked with the whole grains.  And the best part: after I took a few pictures, I got to eat it! 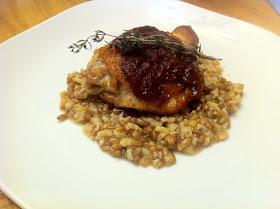 Want some Bob's Red Mill grains and olive oil from the California Olive Ranch?  Read blow for the details about how you could win some!
Additional Entries: