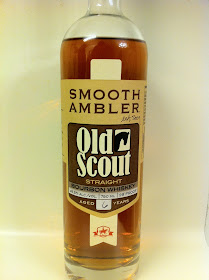 Whisk(e)y Wednesday makes its American whiskey debut with a straight bourbon whiskey out of Smooth Ambler in West Virginia.  That should debunk myth #1 about bourbon only coming from Kentucky.  By law, bourbon does have to be American.  But Kentucky has not rights to it specifically.  They just happen to make a whole lot of it.  The Old Scout from Smooth Ambler is a six year old whiskey from a distillery that has only been around since 2009.  So they clearly got the bourbon from somewhere else, but that's okay, because it is pretty damn good.  The nose presents a caramel sweetness with some honey, vanilla, and citrus.  The taste is strong in the oak department while remaining sweet like a Werther's caramel.  It finishes quickly in a clean get away with little lingering flavors.  "Punch, but quick finishing," says James, our producer on Raise a Glass.

Whisk(e)y Wednesday is a blog post series on Bite and Booze presented by The Cove. Check out The Cove in Baton Rouge, LA to browse their selection of over 200 whiskeys (including bourbons) and 325+ Scotch whiskys. Whisk(e)y Wednesday is created and rated by the hosts of Raise a Glass. Scores are marked for Nose, Taste, Finish, and Balance and Complexity using our own propriatary scoring system. Marks are then added and averaged, leaving us with a final score out of a 100 point scale. Our scale should be looked at on the full range of 0-100 rather than an academic range where 70 is passing and anything less is failing. A 50 should be considered a very mediocre whisk(e)y while anything below 10 is absolute horse piss and anything above 90 is rather extraordinary.