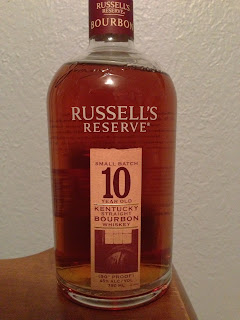 Russell's Reserve is a 10 year aged Kentucky Straight Bourbon Whiskey that, at least on the average score, slightly disappointed. I enjoyed the nose as it has some playful hints and reminded me of a mild Speyside Scotch.  It had floral and mineral notes which were inviting, but unique for a bourbon.  The whiskey definitely came across smooth, clean, and easy on the palate.  It had a light oak flavor and rending me of cheese and the light toastiness of crackers.  The whiskey finished crisp and astringent, smoothly fleeting the tongue.  Ultimately, though, compared to other bourbon we've tried, this one didn't really feel as bourbon-y.  Perhaps it is in the 10 year aging process or the amount of malted barley in the mash.  It was quite drinkable, but lacked a certain pizzazz.


Whisk(e)y Wednesday is a blog post series on Bite and Booze sponsored by Calandro's Supermarket. Calandro's has one of Baton Rouge's best selections of bourbon, Scotch, and other whisk(e)ys as well as wine and craft beer. WW is created and rated by the hosts of Raise a Glass. Scores are marked for Nose, Taste, Finish, and Balance and Complexity using our own propriatary scoring system. Marks are then added and averaged, leaving us with a final score out of a 100 point scale. Our scale should be looked at on the full range of 0-100 rather than an academic range where 70 is passing and anything less is failing. A 50 should be considered a very mediocre whisk(e)y while anything below 20 is absolute horse piss and anything above 90 is rather extraordinary.
Share