The hazy New England style IPA’s have been the big trend in the craft beer world for a while now. With very little hop bitterness at the end and a more tropical and juicy sweetness, this style has been embraced by beer lovers and breweries alike here in Louisiana. With great selections of this style from Parish Brewery (Ghost In the Machine), Great Raft Brewing (Grace & Grit) and Gnarly Barley (Jucifer) there’s no shortage of really delicious cloudy brews for us to enjoy. Now Tin Roof Brewery has joined the craze with their latest taproom only release, the FOMO Double IPA.

After redesigning the recipes for their flagship Voodoo Pale Ale and Juke Joint IPA, new Head Brewmaster Michael Till along with owners Charles Caldwell and William McGehee decided the time was right to start working on their own signature double IPA. After a few months of doing test batches and honing in on the right recipe, the FOMO, which stands for Fear Of Missing Out, was born. 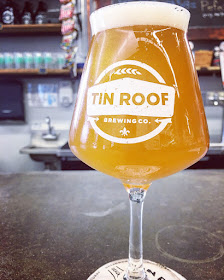 The beer has a deep golden color with the haziness to match its depth. The immediate aromas I picked up were some dark fruitiness and tropical notes with a hint of the dankness that comes with the Eureka hops. The body is very light and easy drinking for 8% ABV beer. The taste is filled with hints of pineapple and candied fruit along with some piney dankness which is normally associated with some of the juicier west coast style IPA’s. There was some slight bitterness on the end with a nice dry finish.

Overall I think Tin Roof has done a nice job with their first entry into the haze filled market of New England style IPA’s. This brew is a taproom only release (hopefully that changes) so make your way over to Tin Roof and grab a glass and/or get yourself a crowler to go.