There has been a lot of buzz surrounding the opening of BRQ Seafood and Barbeque. While BBQ is not a new concept to the South, having new local BBQ place is filling a gap in what is a pretty sparse culinary category in Baton Rouge. BRQ’s Chef Justin Ferguson is a Baton Rouge native who recently returned home after overseeing a number of Chicago restaurants and brought his knowledge and experience back to South Louisiana to show off his pit master skills.

The restaurant is large and inviting and has a contemporary, yet rustic feel. We were greeted by sunlight pouring into the large, street facing windows and delicate flowers adorning every table. Despite its size, it still feels quaint-- homey almost. Once we were seated, our server came to greet us with a basket of house made BBQ chips and pickles. Honestly, that could have been my meal. It took everything in my power to control myself from gorging all of them down because our waiter informed us that we had a feast heading our way. Even Jay, a known pickle hater, downed a handful of pickles and even seemed to like them. That’s big news people!

After I mentally prepared for the feast ahead, the dance of BBQ began. The opening act was an array of appetizers. One by one we were served crab beignets, boudin balls and a heaping mound of buffalo mozzarella in olive oil topped with caviar. I was not expecting to see a mozzarella appetizer at a BBQ restaurant, but I'm not complaining. It was by far my favorite appetizer and a nice change of pace from the typical fried fare. 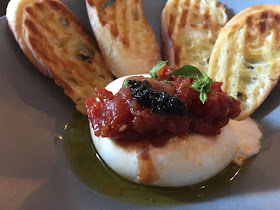 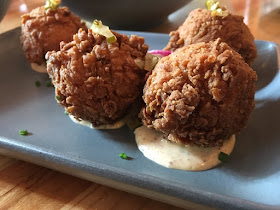 Act two was on the lighter side, a pair of salads. Maybe “light” is the wrong word because it was more like a mountain range of salad. The Brussels sprouts and kale salad came topped with smoked bacon, parmesan, toasted almonds and a tahini dressing. It was a really nice compliment to the BBQ menu and would be delicious topped with pulled chicken or pork if you’re looking for something “lighter” on the menu.

The Moroccan Citrus Salad is a perfect summer salad. Mixed greens topped with grilled pineapple, carrot, pink grapefruit, orange segments, dates, almonds, goat cheese and a citrus mint vinaigrette is a meal in itself and almost too pretty to eat! 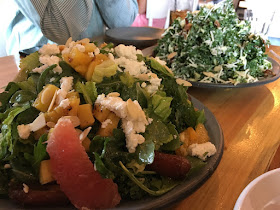 Next came the headliner. A procession of waiters presented us with the “Feed Me" platter. I think just about everyone in the restaurant had to come over and get a look at the butcher block of deliciousness that came to our table. The board was packed with St. Louis which have a straight, rectangular cut and tend to be more tender and Baby Back ribs which have a meaty cut with short, curved bones, smoked and pulled chicken, pulled pork and sliced brisket. The meats were served with four kinds of sauce: original mild, North Carolina vinegar, Louisiana spicy, and South Carolina mustard. Accompanying the board were sides of green beans, collard greens cooked down with bacon, mashed potatoes and goat cheese jalepeño grits.


We were all impressed by the display and all of the meat was smoked and cooked to perfection. The sliced brisket was to die for and the pulled pork was the perfect, juicy base for the various sauces. Phew! Yall, I am getting hungry again writing this.

And finally, the encore: A monstrous, delicious CARROT CAKE. It has to be put in all caps because it would be an injustice to the size and magnitude of this dessert for it to just simply be written out. See Jay’s head for scale: 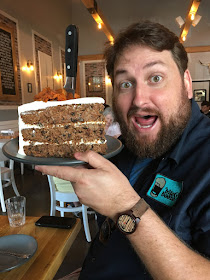 BRQ put on quite the show for us and we had a wonderful experience dining at what we are sure is a new staple in the Baton Rouge area. Word to the wise: come hungry.
Share