Good morning Tiger fans, are you all as excited as I am for an 11 AM kickoff? And by that, I of course mean not excited at all... who's really excited about football at 11 AM? That's not enough time for decent tailgating, not enough time to get the smoker going for some good BBQ, not enough time to enjoy this hint of Fall weather and barely even enough time to wake up and get ready for some football.  It is enough time, though, for some #wakeywhisky! This morning I'm going to the Isle of Jura in Scotland for some Jura Single Malt Scotch.

The Isle of Jura lies between mainland Scotland and the Isle of Islay, but is sparsely populated (less than 200 inhabitants) and the only way to get there by car is to take a ferry from the mainland to Islay and then over to Jura. The island is home to a single eponymous distillery known as the Isle of Jura Distillery which produces several vintages, including the 10-year variety that I have this morning. Jura is technically a Highland-region scotch, as all the islands (other than Islay) are grouped together with the Highland malts, but it shares a lot of characteristics with the neighboring Islay region.  This scotch is bottled at 40% alcohol after primary aging on used bourbon barrels and finishing on sherry casks. 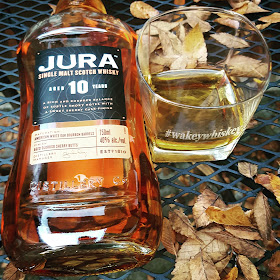 This scotch pours a deep gold, with a blend of peat, smoke and sugar on the nose. The sweetness is best described as a candied fruit, like a sweet dried up piece or apricot or peach, which works really well with the hint of peat and touch of smoke. I feel like the sweet notes come through the strongest, but it still blends together very well.  On the tongue the smokiness comes through more, and the peat a little less, with the sweeter notes giving way at first and reappearing on the back end of each sip.  Other flavors come through as well, a hint of leather and something that resembles a bit of burnt BBQ.  It's quite complex, extremely enjoyable and overall a very pleasant sip.

This is a fantastic scotch for a fall football morning, the smokiness fits right in and the price is very reasonable for a 750ml bottle of scotch, somewhere in the $30-40 range. I hope you are all enjoying some wakey whisky or #wakeywhiskey of your own this morning, and GEAUX TIGERS!
Share