Hello everybody, and welcome to the first Bite and Booze edition of Feature Beer Friday!  This is a reprisal of a segment I used to write (nearly) weekly for my old beer blog, BR Beer Scene.  Basically every Friday I'll be featuring a new beer with some background information, a review, and if I'm sharing it, what my friends think about the beer.  I used to score each one based on a 100-point scale focusing on 4 critical aspects, but this time around I think it'll just be a general review.  There is never a shortage of beer laying around the Bite and Booze HQ, so look for an eclectic mix of beers both locally and from around the world. 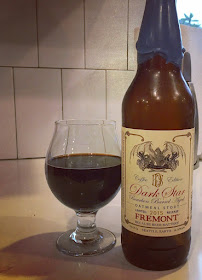 Today's choice is one from the Bite and Booze cellar, the 2015 Coffee Edition release of their Bourbon Barrel-Aged Dark Star Imperial Oatmeal Stout from Fremont Brewing out of Seattle, Washington. I recently hosted a baby shower (good times ahead!) over at the Bite and Booze HQ, and Jay was more than willing to break this one out for everyone to try! If you think there's a lot going on in that lengthy beer name, you're absolutely right. This stout features layers upon layers of flavor.  The base beer is their Dark Star Imperial Oatmeal Stout, which is then aged for up to 18 months in bourbon barrels, before being blended with barrels of different ages and bottled with coffee added.  Fremont Brewing releases this specialty once a year around the middle of October.

First thoughts on the appearance is that there is minimal head, but that's not really surprising for a 2+ year aged beer that clocks in at 14% alcohol.  As long as it's not flat it should still be good to drink, and this one was perfectly carbonated for an aged imperial stout.

The nose on this one is crazy complex, with roasted chocolate notes coming through from the base beer, coffee present but not as strong and the bourbon aging dominates giving a bright oak and vanilla overtone to the richly dark base.  If I was still keeping score this would earn a nearly perfect mark for the aroma.

The taste is more of the same, just a well layered complex imperial stout where all the flavors play well but also compliment each other.  The bourbon barrel aging is still the star of the show, but the coffee and dark malts support it extremely well.  A bourbon barrel aged beer without a strong and flavorful base can start to taste too much like whiskey without body, and this beer's base more than supports the bourbon flavors imparted upon it.  It finishes smooth, the 14% abv is well concealed by the stronger flavors, maybe too well as this is an easy sipper!

Fortunately I had a few friends to share this beer with, or the strong abv and amazing flavors would have combined to sneak up on me.  If you are ever up in Seattle or see some Fremont Brewing beers on the shelf elsewhere, give them a try.  And if you see some of their Dark Star series, bring me one!  Cheers!
Share