St. Patrick’s Day in Baton Rouge is a very big deal. People line up sometimes overnight to secure their spot for the annual parade and prepare for a long day of drinking. There’s lots and lots of Jameson and Guinness being consumed and unfortunately, a lot of very unnecessary green beer. Luckily for us Tin Roof Brewery made sure to give us a better option this year with their third consecutive specialty release the Magic Marshmallow Breakfast Milk Stout.

To keep with the theme of the day, the guys at Tin Roof decided to go all out and include Lucky Charms cereal into the brew recipe. How much Lucky Charms you might ask? We’re talking 72 boxes of magical deliciousness! They also used a marshmallow flavored coffee and lactose to give it some creaminess. 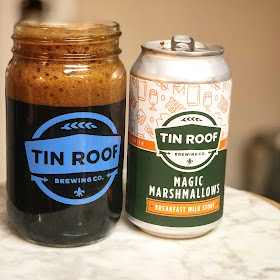 On my first pour I noticed the hint of the cereal coming through with a bit of the coffee on the aroma. Greeted with coffee first, some vanilla creeps in, but after it began to warm up I thought the vanilla faded giving way to more of the coffee. The lactose was minimal in my opinion, but still noticeable. The cereal itself arrived at the finish but was subtle which I liked with a bit of bitterness rounding it out.

Tin Roof has been crushing the small batch game recently with the release of the Santeria Double IPA (aka the beer formerly known as JUJU), Haze Hunt Triple IPA and now with the release of Magic Marshmallow they continue to bring down the house. Unlike the aforementioned Santeria and Haze Hunt which were both brewery exclusives you can find this breakfast milk stout on tap at your favorite craft beer watering holes.

Congrats to Tin Roof on another delicious brew. I can’t wait to see what type of specialty beer they do for Easter!*

*Tin Roof has nothing scheduled for release that’s Easter themed. Or do they???
Share