Addie's: Let's Eat Outside of DC 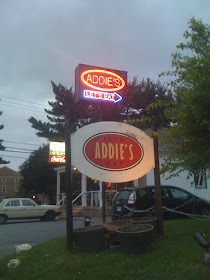 Addie's delivered exactly what I was hoping for.  In the Washington DC suburb of Rockville, MD, I found myself surrounded by national chains and shopping mall cuisine, of which I wanted no part of.  I traveled to the District for a work conference, and the last thing I wanted to do was settle for food that I pass up on routinely back home.  After doing a little web searching for some local eateries, I stumbled across Addie's.  Only a 15 minute walk from my hotel, I decided that I'd give it a try and hopefully have something to add to Bite and Booze from the East Coast.

Upon arriving at Addie's I realized that the restaurant is set in an old house.  I really like that restaurant setting and have talked about that being the kind of establishment I'd like to own one day, so my excitement had really piqued at that point.  At 7 pm when I stepped in the front door, the place bustled with dining excitement.  I stood there for a second and looked around.  I really liked the atmosphere, but there was no host to greet me or waiter to help me.  After a few seconds, I stepped out to reevaluate my thoughts on the evening.  On one hand, the restaurant had to be good to be that slammed on a Wednesday night.  On the other, I did not get greeted at all, and perhaps that was indicative of the dining service as well.  Before I could give it too much thought, I noticed that right next door was a little pub serving well priced cold beer.  That seemed like a better option to determine my next move, so I walked into Dietle's Tavern and ordered a pint of Yuengling Lager.  I enjoy this regional brew and certainly prefer Yuengling on tap over most other American macrobrews.  There was baseball on the TV, Nationals and Orioles "fans" talking ball, and a cold beer in my hand.  Happiness is simple. 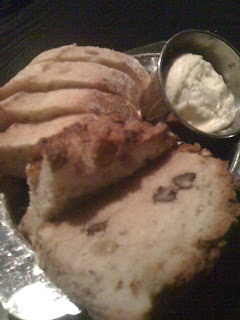 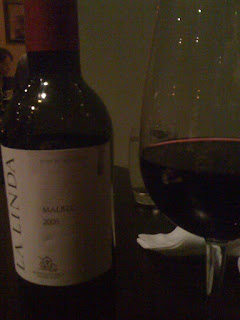 Bread and Wine at Addie's in Rockville, MD
After a couple pints my hunger reappeared and I figured the time had come to go back to the neighboring Addie's to check on the grub situation.  This time around the staff promptly greeted me as I walked in the door and sat me at a cozy table in the corner of the former living room of the house.  I ordered a bottle of '08 La Linda Malbec and the restaurant brought out a course of bread and butter.  Addie's served freshly baked French-style white bread as well as a pseudo cornbread that tasted like it had teamed up with pound cake and fruit cake.  It really was quite fantastic, especially when eaten with the accompanying creamy butter.  The Malbec also hit the spot and the half bottle lasted me perfectly through the entire meal. 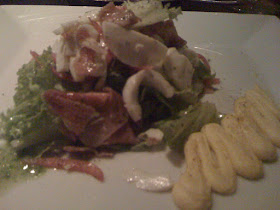 Benton Ham and Green Leaf Salad
I wanted a cup of the asparagus and parmesan soup but they had sold out of the rotating daily special, so I settled for a salad instead.  My waiter, Octavio, suggested the Benton Ham and Green Leaf Salad.  The salad  came with a deconstructed deviled egg where the boiled whites were mixed in with the ham and greens while the yolks were turned into a paste and spread on the side.  I really enjoyed the egg and the plating, but overall the salad did not quite live up to the anticipation.  The greens were mixed with macerated red onion and an herb vinaigrette.  The ham from their charcuterie selection was money, but the greens and dressing lacked just the smallest amount of flavor to put the salad over the top.  Still the egg yolks and ham made up for minimalist dressing and slightly bland greens. 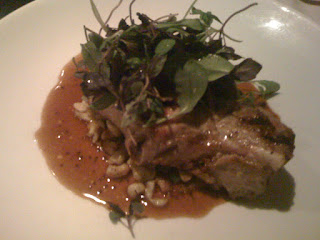 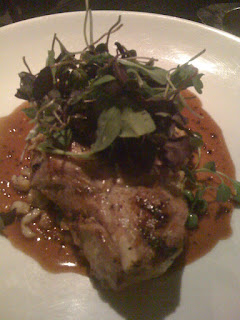 My Entrée from Addie's: Locally Raised Pork Chop
There were several amazing options for a main course, but I easily settled on the pork chop because I thought it would pair well with the Malbec I had been sipping on.  The chop came from locally raised swine.  I asked for the thick cut pork to be cooked to a medium temperature and it came out exactly as ordered.  Accompanying pork chop was black pepper spaetzle, fava beans, lemon confit, and a brown ale mustard sauce.  The succulent chop tasted terrific with new and interesting flavors compared to the Louisiana cuisine that I'm used to. 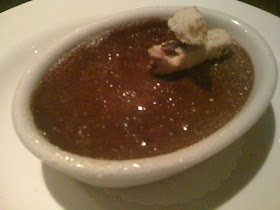 Mexican Chocolate Creme Brulee
When Octavio told me about the dessert options I immediately decided on the Mexican chocolate creme brulee.  The sweet treat had a beautiful blend of warm and cool temperatures as well as crunchy and smooth textures.  The brittle top layer combined with smooth creme to leave a rich yet delicate dessert with a distinctively Mexican flavor that added a just the right touch of uniqueness to the dish.  My extreme compliments go to the pastry chef for delivering the top dish of the night!