Beer and Pizza at the St. Elias Brewing Company in Soldotna, AK 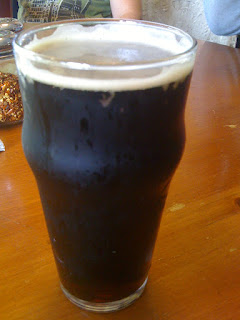 Our second day in Alaska brought a road trip from Anchorage, down the Kenai Peninsula, to the town of Homer where we had a house rented for the week.  Along the way we passed through a town called Soldotna which is home to two craft breweries.  Ready for lunch and brews for the non-drivers, our caravan stopped in to see what the St. Elias Brewing Company had to offer.

While St. Elias only opened its doors and tapped its first kegs in 2007, the brewery and pizza joint is already well known for producing high quality bites and boozes.  They claim that their beer matches the personality of their business: fun and lively yet historic and eclectic.  In addition, the brewery also serves brick-oven baked, rustic, traditional Neapolitan style pizzas.  I was ready to get started and see what I thought about these proclamations.

Our party of seven arrived at St. Elias and were promptly greeted by the aromas of baking pies and boiling mash.  Within minutes we had a table and began ordering brews.  My first choice was a pint of Marathon Mild.  The Marathon Mild is a seasonal that is brewed in the style of a  English working class ale.  Though the beer is very dark in color, it actually tastes a fair amount lighter than it appears.  I enjoyed the brew and prepared myself for more. 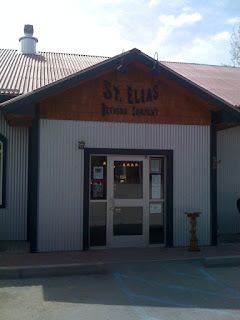 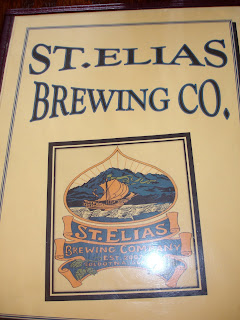 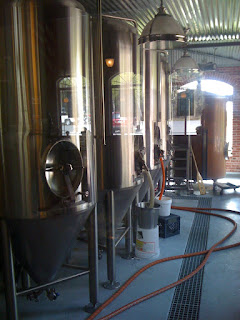 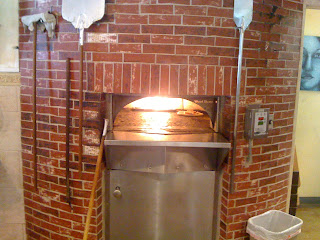 Brew Tanks and Brick Oven at the St. Elias Brewing Company
Since there were seven of us there, we decided to order seven different pizzas and share the variety amongst ourselves.  Boo tried to mess this process up, but in the end we got it taken care of.  All of the pizzas were pretty good, though I think my favorites were these two: 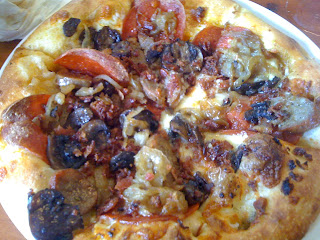 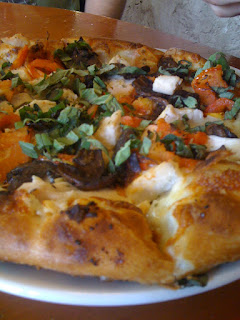 Brewhouse and Chicken on the Ranch Pizzas
The Brewhouse pizza is loaded with garlic oil, mozzarella, provolone, bacon, Italian sausage, pepperoni, marinated mushrooms, and caramelized onions.  The salty pie tasted fresh and delicious with the meats, mushrooms, and onions all melting together with the cheese blend.  The Chicken on the Ranch pizza had garlic oil, ranch, mozzarella, provolone, garlic chicken, marinated mushrooms, roasted tomatoes, and fresh basil.  Although the pizza seems very similar to the Brewhouse pie, the flavors were actually a good bit different.  The real killer ingredient in all the pizzas was the dough.  The fire-baked crust had a crisp and flavorful outside with a remarkably chewy inside for a small thin crust pizza. 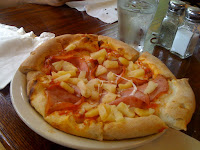 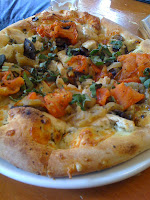 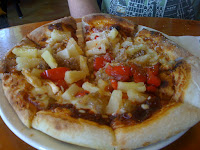 
Running in the close second tier were the Hawaiian, Chicken Pesto, and Lonestar pizzas.  The Hawaiian was an average version of the classic pineapple and ham combination.  St. Elias's Chicken Pesto was a like a the second cousin to the superior Chicken on the Ranch.  Finally, the Lonestar showed a little originality by putting red peppers, chicken, onions, and pineapples on a homemade barbeque sauce base.  It proved to be an interesting combination that succeeded in offering something other than the typical pies. 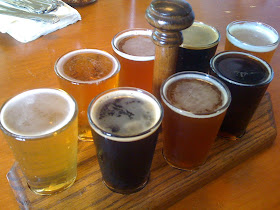 Sampler Platter of Brews
To get off the subject of pizza for a bit, let's switch gears back to beers!  Not knowing what to order and wanting to try them all, the logical choice involved something that brewpubs like to call "samplers."  I got eight 3-ounce pours of brews to indulge on.  Starting on the left and going clockwise: Even Keel Kolsch, The Farmer's Friend, Puddle Jumper Pale Ale, Mother's Milk Irish Stout, Williwaw IPA, Vanilla Bean Porter, Brass Monkey ESB, and Marathon Mild.  I'd tell you what my favorites were, but after a week of drinking I really don't recall.  I'm pretty sure that the darker the beer, the more I liked it.  The light beers were just average, but some of the others like the Vanilla Bean Porter and the Brass Monkey ESB were fantastic! 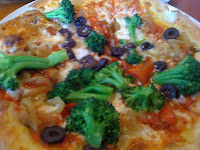 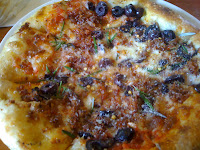 Peter Rabbit and Smokestack Pizzas
My bottom rung of pizzas were still tasty, but they would be the least likely for me to order again.  The Peter Rabbit filled the role of St. Elias's vegetarian pie.  Broccoli on pizza just doesn't fit with me despite it being quite edible.  For a veggie pizza it did the trick, but not being a vegetarian myself, I'd shy away from it next time.  Finally, the Smokestack had bacon, olives, and rosemary.  Again, the pizza was fine, just not up to par with some of the other ones.  I would have appreciated a little pizazz.  Still, simple is okay when you have bacon, so it's not all bad! 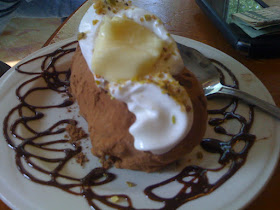 Yukon Gold Tater
Eusebio took the adventure of ordering a dessert.  The Yukon Gold Tater is not actually a baked potato at all!  The artistic creation is actually a larger portion of cookies 'n' cream ice cream rolled in powdered cocoa, then topped with whipped cream, pistachios, and a little custard that looked like butter.  The dessert could maybe earn credit for creativity, but I'd have a hard time saying that it earns much merit otherwise.  The ice cream is Dreyer's and isn't anything special or homemade.  The cocoa powder that is used to give the potato skin appearance is so fine that both Eusebio and I both accidentally inhaled it to the point that we choked.  After coughing a bit and drinking some beer to clear my throat, it became obvious that the dessert did not quite tickle my fancy.  Oh well, I still enjoyed the pizza and beer, and I had plenty more of Alaska to eat and drink!