I recently took part in the Moveable Feast, a charity food and beverage event held in the Perkins Road Overpass area.  The Moveable Feast supported Best Buddies Louisiana and involved local merchants dealing out cuisine and adult beverages.  Rather than all of the dishes being in one spot, the Moveable Feast lived up to its name as the participants had to move around from restaurant to restaurant to sample the fare and fill their bellies.
Best Buddies Louisiana is dedicated to establishing a global volunteer movement that creates opportunities for one-to-one friendships, integrated employment, and leadership development for people with intellectual and developmental disabilities. All of the proceeds from Moveable Feast support programs for Best Buddies throughout the state! 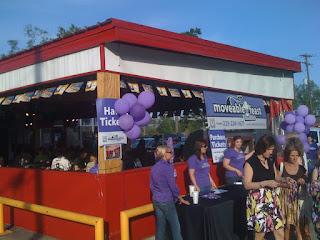 The Moveable Feast Began at Zippy's for Me
Justin joined me as we began the charitable tour at Zippy's, a place for burritos, tacos, and more.  They graciously handed out some chips and queso along with a sampling of their Sauza margarita.  Neither item impressed me too much, but it got the appetite wet for the rest of the evening. 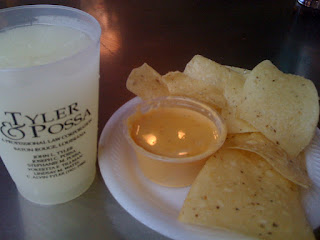 Margarita with Chips and Queso from Zippy's
While walking to our next destination, Justin and I came across a ring toss game which featured bottles of wine.  The rules were simple: donate $10 to charity, get three chances to ring a bottle of wine, and keep the bottle if you ring one.  Jackpot!  I won.  Woohoo!  This evening was going great already! 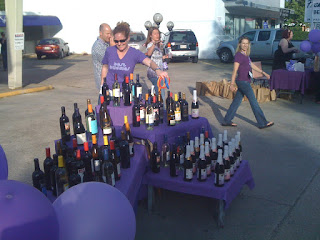 Ring-a-Bottle of Wine!
We soon moved on to Schlittz & Giggles' new location where were treated with fresh thin-crust pepperoni pizza and a cold cup of Bud Light Lime.  Thanks very little, Mockler Beverage.  Seriously, I understand that the donation of four kegs of beer to a charitable event was very kind of you, but did you really have to just unload kegs of a beer that you can't sell?  Why not use this as an opportunity to introduce some of the craftier beers that you distribute?  Bud Light Lime, really?  Oh well.  I struggled through drinking my cup and moved onto Rock-n-Sake.  I will say that Schlittz & Giggles' pizza isn't too bad if you like thin crust, so thanks to them for the grub! 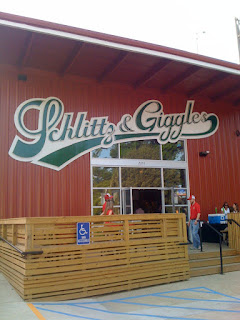 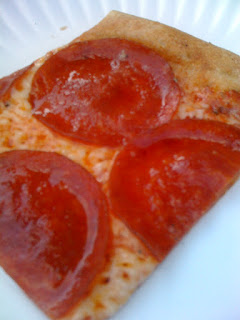 The New Schlittz & Giggles and Pepperoni Pizza
Rock-n-Sake is a new sushi bar that has livened up the old Perkin Road Hardware space very nicely.  This was my first time stepping in the building and to my surprise it was not as neon-lit and trendy as I thought it would be.  I actually liked and appreciated the decor, which made me even more ready to try the sushi.  Rock-n-Sake handed out samples of their Spicy Snowcrab Roll and Fresh Salmon Roll to the Moveable Feast participants.  While they didn't break out any signature rolls, these standards were pretty good and certainly made we want to go back for more at another time.  Rock-n-Sake also passed out a Pomegranate-Sake Punch.  This drink had a great flavor to it and consisted of a pomegranate liquor, sake, pineapple juice, and Sprite.  Pretty tasty, I must say. 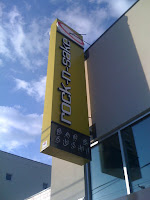 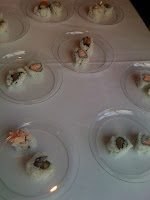 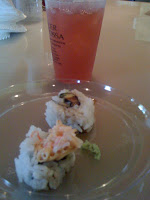 Rock-n-Sake's Sushi Rolls and Pomegranate-Sake Punch
Next stop aboard the Moveable Feast train occurred across Perkins Road at one of my favorite Baton Rouge eateries: Pinetta's European Restaurant.  Pinetta's is a dimly lit hole-in-the-wall that plays European tunes from a collection of countries.  They proudly serve cuisines from Italy, Germany, Poland, and more, and do it all quite well.  On this occasion they moved their operation outside and served some of the best food on the walking tour.  Pinetta's passed out glasses of Sangiovese, and I do love Sangiovese!  I was already sold.  They then offered a plate loaded with great samples of their cuisine.  Their selection included Italian meatballs, Mediterranean hummus, and bread pudding with rum sauce, all of which were delightful.  If you've never been to Pinetta's I suggest you try it soon, though be advised that it is best fit for a date. 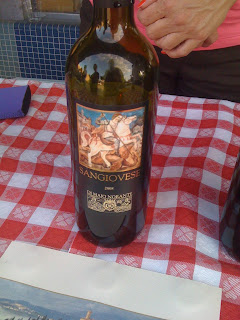 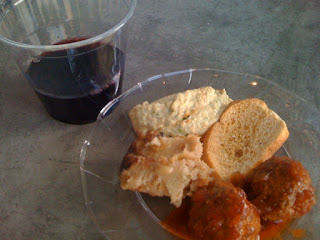 Sangiovese, Meatballs, Hummus, and Bread Pudding from Pinetta's European Restaurant
After the true delight of Pinetta's, Justin and I hopped back across Perkins Road for a stop with Kyle at Jimmy John's.  Kyle had an array of delightful gourmet sandwiches for Moveable Feast participants to choose from.  After giving the roast beef a try and chatting with Kyle for a bit, Justin and I moved on to Gourmet Girls Fine Catering where we were refreshed with a cool sample of Barefoot Pinot Grigio and a Smoke Gouda Pimento Bouche.  The bouche on a cracker had a great taste to it and was one of the more complex items of the evening, which I certainly appreciated. 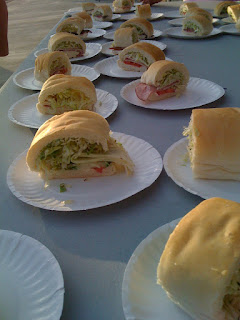 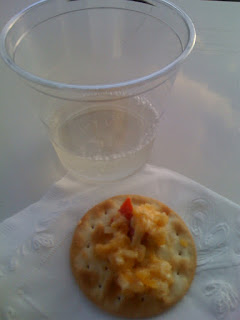 Jimmy John's Sandwiches and a Smoked Gouda Pimento Bouche with Barefoot Pinot Grigio from Gourmet Girls Fine Catering
Moving closer and closer to the Overpass, our next destination was DiGiulio Brothers Italian Cafe.  This quaint restaurant is another staple of the overpass merchant's district and is beloved by many regular customers.  For the Moveable Feast they served a cold chicken pasta salad with feta and tomatoes.  While the pasta salad wasn't bad at all, I didn't think it accurately represented the quality of food from DiGiulio's kitchen and I wish they would have stepped it up a little more.  They also served a splash of Riesling, which did pair nicely with the pasta dish. 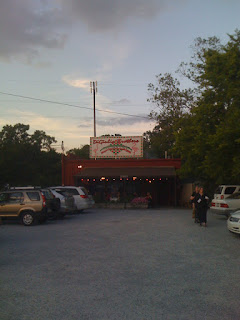 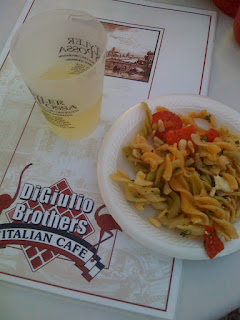 DiGiulio Brothers Italian Cafe: Chicken Pasta Salad and Riesling
After leaving DiGiulio's slightly disappointed, we moved on down the line to George's.  The thing I love most about George's (overpass location) is the atmosphere.  The small space inside feels cramped at times but also reassures you that the place is authentic and local.  While the dollar bills on the ceiling is nothing inventive, George's has been doing it for quite some time and what it lacks in originality it makes up for with character.  Outside of George's we got a cold glass of Burnett's Pink Lemonade Vodka mixed with County Time's Pink Lemonade.  Consumption of the beverage overpowered my taste buds with sweetness and I thought that it really could have used a little more lemonade-style tartness to balance that out.  Perhaps a little fresh lemon juice is all it was really missing, but I didn't want to drink the whole thing.  Inside of George's we were served mini-muffalettas which were some of the best things on the menu from the entire day.  The sandwich tasted warm and fresh, with great bread and that tang from the olives that true muffaletta lovers crave.  Unfortunately it was dark inside and I couldn't get a picture of the sandwich, but rest assured that it was good! 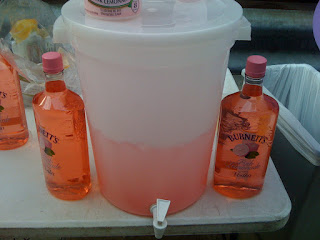 Burnett's Pink Lemonade
Chelsea's Cafe served as our next dining destination.  Along with a Parrot Bay Rum Punch that tasted like an over-sweetened pina colada and some more cold pasta salad (who thought that would be a good idea?), Chelsea's did manage to impress with some fantastic crawfish cakes with homemade pepper jelly.  The crawfish cakes by size and outside texture reminded me of a large boudin ball.  However, when topped with a fantastic pepper jelly and bitten into, I certainly appreciated the crawfish stuffing for being something different. These guys were delicious and should probably on Chelsea's appetizer menu full time! 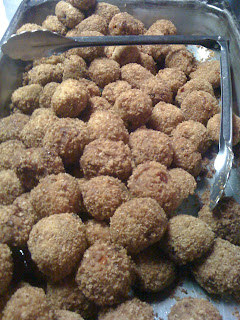 Crawfish Cakes at Chelsea's Cafe
Our tour of the Perkins Road Overpass merchant's district was coming to an end, but Justin and I still had a couple more stops in us.  Zee Zee Gardens opened their doors for us and the rest of the participants, but unfortunately they had run out of pigs-in-a-blanket by the time we got there.  They also served a knock-off sweet tea vodka which wasn't bad, but after a couple sips I had enough and we continued to Ivar's. 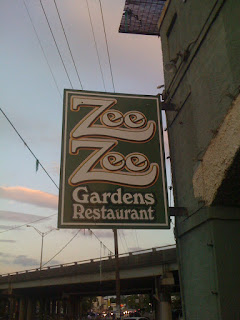 Zee Zee Gardens
Finally Justin and I arrived at Ivar's Sports Bar and Grill.  Ivar's had more Bud Light Lime (see above for my thoughts on that) and some catfish nuggets.  The catfish nuggets were freshly fried and piping hot, which surprised me since Zee Zee's had been out of their food.  Way to go Ivar's for planning correctly!  The catfish remained tender and flaky as it rounded out the evening of indulgence.  The fish had just the right amount of spice in the batter and complimented the tartar sauce very well. 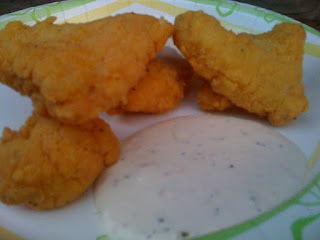 Catfish Nuggets at Ivar's
Not to finish there, Justin and I remembered the Kleinpeter ice cream cart that had been set up in front of Pinetta's.  We headed back for a little dessert to properly cap off the evening.  I had a couple scoops of delicious Louisiana ice cream, though the flavors that I chose escapes me.  I do know that there is always room in a full stomach for ice cream, and it hit the spot!
I'd like to thank everyone who put on the Moveable Feast, and Chelsea Harris specifically for reaching out to me to cover it.  The event seemed like a fantastic success and should only grow in the future.  Baton Rouge has some great restaurants and a tremendous culture, and events like this highlight what this city can offer.  Thanks to all of businesses that contributed, and I'll make sure to see you again next year!
Please share this post on Facebook, Twitter, StumbleUpon, Digg, or whatever other Social Media you use to help promote the Best Buddies of Louisiana and the Moveable Feast!