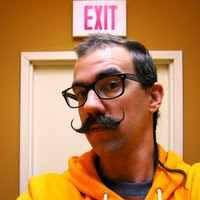 My buddy Matt Callac is putting his mustache to good use.  He recently signed up with the "Fund a Stache" website to collect charitable donations of behalf of his mustache.  As part of the giving, he is also accepting challenges from people who donate to the Blood: Water Mission charity which supplies clean drinking water to people who are unfortunate enough to not have reliable access to it.

So you may be asking, "aside from clean drinking water and a really cool mustache, what does this have to do with Bite and Booze?"  Well, I'll tell you!  One of his recent challenges sent him to KFC to take the Double Down Challenge.  If you aren't familiar with the KFC Double Down, it is a "sandwich" that consists of bacon, two different kinds of melted cheese, and the Colonel’s secret sauce inside of two Original Recipe chicken breasts that act as the bun.  Not only did Matt eat a KFC Double Down, he actually indulged in two of them.  But, that's not all!  Matt also "Lutherized" one of the Double Downs, meaning he put the "sandwich" between two donut halves (Krispy Kreme, of course) before consumption.  AMAZING!  Well done Matt!

Additionally, as far as Bite and Booze goes, Collin Ford recently asked me to do a blog post the KFC Double Down, but now I don't have to, because Matty C. has done it for me! 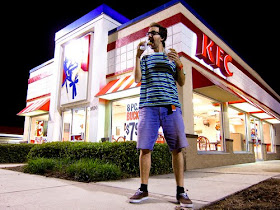 Here is the video from Matt's incredible feat.  Also, please make sure to check out his "Fund a Stache" website and contribute to such epic challenges (and to clean water)!