The German side absolutely dominated England today to move on to the quarter finals of the World Cup.  Next up for Germany will be this afternoon's winner between Argentina and Mexico, but for now I'd like to give German bites and boozes their due. Germany is rich with culture, tradition, and football. Generally, with the exception of mustard for sausages, German dishes are rarely hot and spicy; the most popular herbs are traditionally parsley, thyme, laurel, chives, black pepper (used in small amounts), juniper berries and caraway.  As far as beverages go, the most common are obviously all beer, but since that is being covered on the BR Beer Scene, I'll take a look at korn. 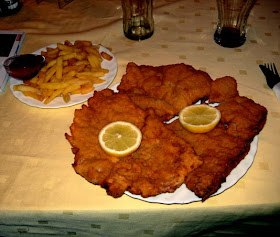 German cuisine has often been labeled as stodgy and fatty, which can be attributed to the lack of variety in the rural German countryside until the last 200 years. But Germany has benefited from a close association with Italy and France and adopted many of their spices and cooking methods, always with a German twist.

Schnitzel is fried meat.  And it is tasty.

Korn is a German spirit that is usually made from rye, but may also be made from corn, barley, or wheat. It is usually drunk neat but is sometimes added to Berliner Weiße.  Korn differs from vodka in that it is less rigorously filtered, which leaves more of the cereal taste in the finished spirit.  Korn is very popular in Germany, especially in the northern part. In some places, a beer is often ordered together with a “Kurzen” (“short one”), i.e., with a shot of Korn. This combination is called a “Herrengedeck” (“gentlemen’s cover”) in most of Germany.  Korn is the cheapest kind of spirit available in Germany, which has given it a somewhat dubious reputation. Traditional Korn contains about 32% ABV (64 proof); Doppelkorn (double Korn) has at least 38% ABV (76 proof). A weaker variety of Korn with less than 30% ABV is sold under the name “Klarer” (“clear one”).  Some popular brands of Korn in Germany are Mackenstedter, Berentzen, Nordhäuser, Fürst Bismarck, Dornkaat, Oldesloer, and Strothmann.