My final recipe from Emeril Lagasse's new cookbook Sizzling Skillets and Other One-Pot Wonders is probably the quickest recipe to make from the entire book.  That's not why I chose it though.  While I've eaten calamari and squid salads at many restaurants before, I hadn't ever actually worked with raw squid.  That needed to change.  Emeril's recipe for stir-fried squid with chili sauce seemed intriguing so I decided to see what I could do.  I found everything I needed, including the frozen squid bodies with tentacles, at Calandro's Supermarket.  Once I got home, the time was right to cook something spicy! 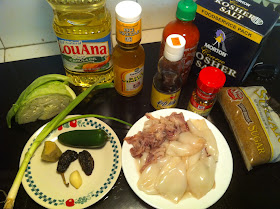 The recipe had three main components.  First, the squid itself had to be sliced into rings, dusted with crushed red pepper and then stir-fried.  Second, the chili sauce had to be made with the vinegar, sesame oil, brown sugar, salt, Sriracha chili sauce and ginger.  The final component included the cabbage, green onion, garlic, jalapenos and chilies. 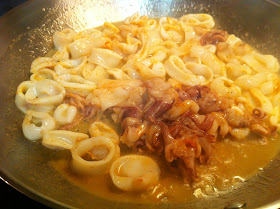 After all of the prep had been taken care I got the squid in my pan (a wok would have been preferable) to give it a quick fry.  It didn't take long in the canola oil to cook it off, then I set it aside to focus on the rest.  I quickly put the cabbage and accompaniments into the same pan to stir-fry them until soft.  Once the cabbage started to wilt I added the chili sauce and then returned the squid to the wok as well. 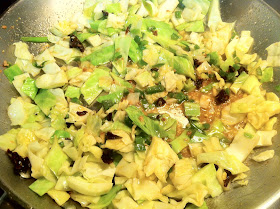 The stir fry had a great flavor and I was impressed at what I had been able to accomplish in just about 15 minutes of total time.  The spice ended up being rather intense but not too much for my palate.  The squid had an excellent texture.  I knew the most important part would be to cook it just right to where it wasn't overly chewy. 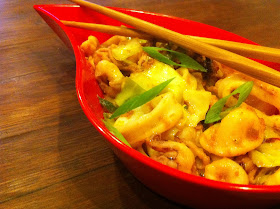 I really enjoyed my blogging party time with Emeril's new cookbook.  Having made nine of the recipes from the book, I'd definitely recommend it to anybody who is looking for some creative ideas for dishes to make in your own kitchen.  I certainly got to step out of my comfort zone with a few of these dishes and I encourage any chef, foodie, or fan to do the same!