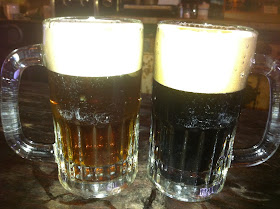 Choosing beer is easy when you only have two options: light or dark.  The answer: get both, of course!  On a recent trip to New York City I had the pleasure of stopping in at McSorley's Old Ale House in Manhattan's East Village.  LSU Alum and current MLB employee Adam Wilson took me on walking tour of the area, and fortunately we passed by this landmark of a bar.  McSorley's dates back to 1854 and prides themselves on being NYC's oldest continually operating saloon.  Stepping into McSorley's really is like taking a step back in time.  Women weren't allowed to frequent the establishment until 1970.  And by frequent, I mean enter.  There is sawdust on the floor... on purpose.  And there are no fancy beer taps with different brewery logos beckoning to be sold by the pint.  Nope.  Not even close.  McSorley's has two beer offerings, and you have to buy two at a time.  They come in 10 oz mugs and are two for $5, cash only (not a half bad deal for NYC!).  Your options don't say anything about the style of beer or the balance of malt and hops.  Only light or dark.  You can read more about the history of McSorley's Ale and how they survived through Prohibition on their website.

It actually turns out that at the current stage, McSorley's beer is brewed by the Pabst Brewing Company and is available at places other than McSorley's Old Ale House.  The dark beer is actually a dark lager, pouring nearly black in color with a tan, creamy head.  The toasted malts are present and overall the beer is fairly mild and pleasant to drink.  The light beer was nothing special but I still enjoyed going back an forth with Adam for a couple rounds.  McSorley's is a bit of a tourist trap but there are definitely plenty of locals that frequent the place as well.  They serve up some bar food but I didn't order any.  Apparently they get crowded and attract a college age clientele at night.  All in all, I'd definitely go back when doing another NYC pub crawl.  That atmosphere really captured my spirit and I could imagine sitting in there for hours just drinking beer and having actual conversation.  That's my kind of bar for sure!