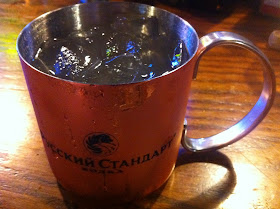 Rumor has it that George Krause, bartender extraordinaire at Doe's Eat Place and current student at the Louisiana Culinary Institute, moves a fair amount of Russian Standard Vodka through the friendly confines of Crowntown at Doe's.  He serves so much Russian Standard, in fact, that he recently received a gesture from the vodka manufactures as a "thank you" for keeping the sales up.  Bestowed upon George was a set of four copper lined Moscow Mule mugs embossed with the Russian Standard logo.  Not being one to let a new set of bar ware to go to waste, I politely asked George to whip me up a Moscow Mule.  Naturally, he obliged.


The Moscow Mule is a fairly simple cocktail.  It consists of vodka, lime juice, and preferably ginger beer.  If you're not sitting on a stash of ginger beer, regular over the counter ginger ale will do.  It certainly worked for George on this cocktail!  Want to try a Moscow Mule for yourself?  Head over to Doe's Eat Place on Government St. in Baton Rouge, sit at the bar with George, tell him Jay from Bite and Booze sent you, and order up a Moscow Mule! 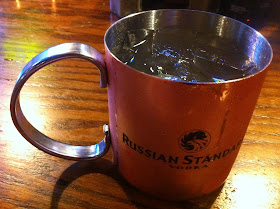