Meanwhile, Back at Café Du Monde… the popular, unique, and festive food monologue show and now a bestseller coffee table/cookbook is back in Baton Rouge for the 3 year anniversary shows, on May 19th and June 9, 2013 at Boutin’s Restaurant.  I'm actually the emcee once again on this Sunday, May 19th, so reserve your tickets now!

Meanwhile, Back at Café Du Monde… premiered as a monologue show with Baton Rouge personalities in May 2010 at The Myrtles Plantation and The Lyceum Ballroom. Over 250 foodies have shared their food stories in shows throughout Louisiana, Mississippi and California. The coffee table/cookbook launched in September 2012 was created and edited by Peggy Sweeney-McDonald, with photography by Troy Kleinpeter. The book has received rave reviews from Emeril, Rex Reed, and Pulitzer Prize winning author Jeffrey Marx, and has been featured in magazines, radio and television throughout the country.


Humorous and heartfelt, these personal food stories all have the common thread of food – our culture and relationships, personal life stories, past love affairs and more. “We’ve all experienced the highs and lows of life, which mostly revolve around our food experiences,” says creator/producer Peggy Sweeney-McDonald, a former actress and veteran event producer (Superstar Events-LA), a Baton Rouge native, LSU Graduate and 15-year resident of Los Angeles, CA. “Everyone has their own “Café Du Monde” —the place where they know what they are ordering, they know it is delicious, and they know they are with good friends and family and for that hour, life is really wonderful!”


Featured foodies/personalities sharing their stories include: 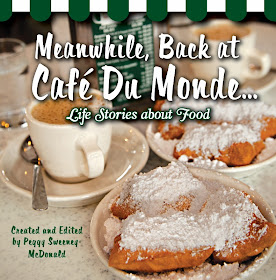 The shows will be presented at Boutin’s Restaurant May 19 & June 9th with doors opening at 6:00 PM and the show beginning at 7:00 PM show - Tickets are $35 and include show, buffet dinner, coffee/tea, tax & gratuity. A cash bar is available for purchase. Located at 8322 Bluebonnet Boulevard, Baton Rouge, LA 70810. Limited Seating.