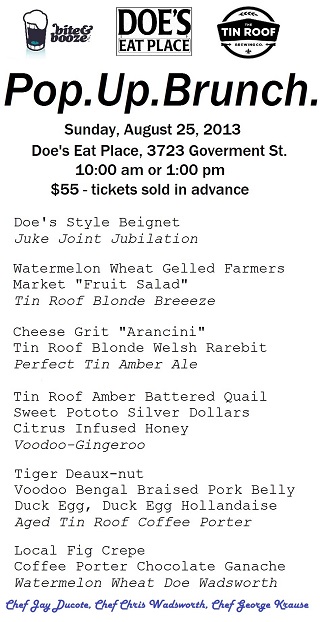 We are less than a week away from my first ever pop-up brunch! Six courses of beer and brunch. How can it get better than that? This gathering of Baton Rouge culinary culture is going to see a lot of talent on display. Chef Chris Wadsworth of Louisiana Cookin' "Chefs to Watch" 2013 and Top Chef's "Padma's Picks" fame will be heading up the kitchen. George Krause, Executive Chef and head bartender at Doe's as well as winner of the 2013 Restaurant Week bartending competition, will be on hand making beer cocktails with Tin Roof Beer.

Actually, this will be first time EVER that all six of Tin Roof's commercially available beers are being poured at the same event. We have an aged keg of Coffee Porter as well as a reserved keg of Juke Joint IPA in addition to the Watermelon Wheat and Tin Roof's three flagship brews in cans.

In addition to this being the first time that one of my pop-ups has been centered around brunch, it'll also be the first time that we've opened it up for two seatings. We'll have our first wave of diners at 10 AM followed by the afternoon crowd at 1 PM. It should be a great time with beer, beer cocktails, and incredible brunch food. As you can see, the menu is to the right. We even got Tiger Deaux-nuts in on the action!

The event will be held in Crowntown, the LSU-themed bar area of Doe's Eat Place on Government St. in Baton Rouge. Only a limited amount of tickets were made available, and most of them have been sold, but as of right now there are still some to be had for each seating. Check out the event's site at http://popupbrunch.eventbrite.com for more information and to purchase your seats before it is too late! I can't wait to see you there!
Share