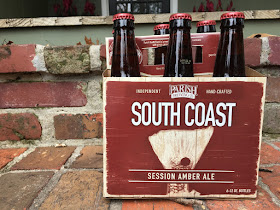 The majority of craft beer drinkers in Louisiana are very familiar with Parish Brewing Company’s three flagship beers, Canebreak Wheat Ale, Envie Pale Ale and the Southcoast Amber Ale. The last one in that list just received a bit of a transformation and I was lucky enough to get a chance to try it at their taproom recently.

Owner Andrew Godley was looking to change up the recipe on the already tasty Southcoast Amber by making it a more approachable and easier drinking beer that could be, in his words, “more crushable” and I would have to say he’s succeeded.


One of the changes made was replacing the original hops used by adding noble Crystal hops to give it more of a floral sensation as opposed to a citrusy American hop. This would also cut back on the sweetness but still keep the complexities of an amber ale. Visually, you can instantly tell the difference from the old recipe. It was much lighter but still had a nice, full body.

Taste wise it’s very comparable to an Abita Amber or Shiner Boch or Yuengling even though all of those are lagers. Jay and I both agreed that the flavor for us was closer to New Belgium’s famous Fat Tire Amber Ale more than anything but the flavor just stood out more.

At the end of the day, Andrew listened to what the consumers were wanting in an amber ale and I think he’s delivered on it by taking an already robust and delicious beer and making it in the way a gateway beer for those who want to dip a toe into the craft beer waters.
He wanted to make a crushable beer for the masses, and I think he crushed it.
To listen to the owner and brewmaster talk about the new Southcoast Amber Ale, check out the podcast below: