Voodoo Bengal Pale Ale was the first Tin Roof Beer I’d ever had.

Back in 2010 my own ‘Me & My Big Mouth’ podcast had reached a point where I felt a change was needed. Our topics of music, movies, sports and random silliness grew a bit stale for me. Craft beer had really sparked my interest and I thought it could be a great new direction for the show. Also around this time I’d heard that a brewery had just opened in Baton Rouge, so it all seemed to fall into place. On a Friday afternoon I headed over to Tin Roof Brewing Company and had my first sip of what would become my favorite brew from this new company. I’ve been a fan ever since.

Flash forward to 2017 and things have changed over at Tin Roof quite a bit. There’s a new brewmaster and brew floor crew that are focused on revolutionizing their recipes and flavor profiles. Like the saying goes, “It’s out with the old and in with the new.” Some of the original flagship beers have been getting recipe makeovers, starting with the Juke Joint IPA that got an update to meet the demands of juicy hop lovers. Now, my old favorite has gotten a complete facelift from the bottom up including the can design!

Ladies and gents, I proudly introduce to you the new Voodoo Pale Ale. 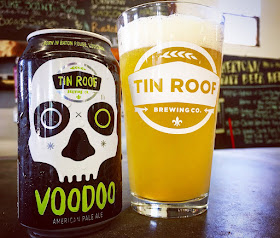 As I was told by their new brewmaster Michael, the only thing left from the original Voodoo Bengal recipe is the yeast.

Gone is the big malt background that was there before. The new addition of Citra, Simcoe and Waimea shine through with citrus and pine notes on the aroma and taste. The haziness is a huge difference from its former version, giving it the look of most of the juicy IPA’s currently out on the market. Upon tasting, I picked up notes of melon and mango with a bit of pine that gave way to a super dry finish. Coming in at an easy 5% makes this a completely crushable beer.

As a fan, former employee, and most importantly, a friend with Charles Caldwell and William McGehee, I’m super excited about the changes happening at Tin Roof. If the changes made to the Juke Joint and Voodoo as well as the exclusive brews that are going up in the taproom are any indication, there are more great things to come from Tin Roof Brewery.
Share