Good morning and welcome winter to South Louisiana! Snow days don't happen down here all that often, and when they do there is usually not REAL snow, just a little that barely sticks to the ground.  Yesterday morning though, the most legit snow I've seen down here, several inches all over covering the yard and cars and roofs, it was pretty awesome, so I broke out my Wakey Whiskey rule book, and sure enough, snow days call for a wakey whiskey.  If you ever want to consult the Wakey Whiskey rule book, let me know.  There's only one copy in existence as of now, but I'll be happy to share some knowledge.

Coincidentally since I didn't have to go to work yesterday I had time to head over to the brand new Bite and Booze HQ to help Jay and the crew unpack all the liquor before a party.  While unpacking a box of whiskey I stumbled upon a bottle of Pappy Van Winkle 15-Year, and I wasn't really going to take "no" for an answer.  I had already broken out a pour of Jefferson's Presidential Select 18-Year for a wakey whiskey at my place, but two pours are better than one, right? 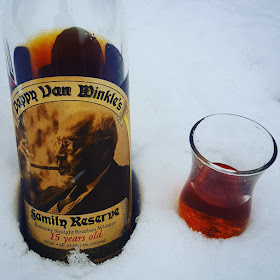 As far as the Pappy goes... any good whiskey fan will know that it's one of the most sought after bourbons in the world.  The whiskey originated at the Stitzel-Weller distillery (now producing Bulleit whiskey), went through the Old Rip Van Winkle Distillery branding, and is now produced by Buffalo Trace (owned by the Sazerac Company out of New Orleans) to the exact recipe that was originated by Julian "Pappy" Van Winkle back in the day. It's now the signature whiskey range of the Buffalo Trace Antique Collection that you'll probably see mention of coming up soon, as it's popular for stores that get some to raffle it off.

Now on to the whiskey itself, and it's amazing.  Complex, incredibly smooth, dark color with a rich oakey flavor that comes from all the time in the barrel.  There are definite fruity notes, dark fruits like cherries and strong hints of vanilla and molasses. This whiskey lives up to the hype, and I'm sure I don't have to spend time convincing anyone reading this to buy a bottle if you have the chance.  If you see one and don't want it for yourself, buy it and I'll pay you back.  Well, unless the secondary prices have gone through the roof... one of the bad things about whiskey gaining in popularity is that demand exceeds supply and the prices reflect it.

That's all for this morning, I hope everyone out there is enjoying this winter weather (we all know Chuck is) and stay safe!  Oh, and here's a bonus wakey whiskey picture of the Jefferson's Presidential Select 18-Year... 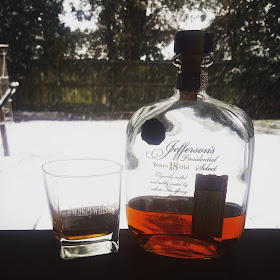