Good morning Bite and Booze readers, and welcome to 2018! This morning's wakey whiskey is serving a dual purpose, as not only is it the start of a new year (at least according to the Gregorian calendar) but it's also an LSU football bowl gameday! I hope 2017 treated everyone well enough, and I definitely wish you all the best in 2018.  LSU is in Orlando today to face off with Notre Dame... the Tigers lost to this Irish on a last second field goal in the Music City Bowl following the 2014 season in the most recent meeting. I think it's time for a little revenge for the seniors, plus a little 3-game bowl win streak would be nice.

For this selection, I went with a whiskey that I picked up on a trip to Chicago earlier this year, the Blind Tiger Bourbon Whiskey from Chicago Distilling out of, duh, Chicago. This is a "small batch" bourbon that is distilled and bottled by Chicago Distilling and I actually have batch 3, bottle 503. The name Blind Tiger comes from prohibition era where watering holes would place a tiger icon in the window to let patrons know that they were serving whiskey inside. How this didn't alert the authorities, I don't know, but hey maybe they were on the take as well? 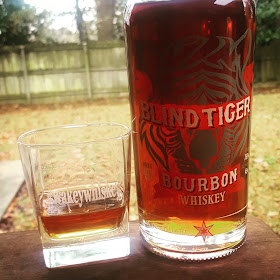 On to the whiskey on this cold morning, the aroma is a little on the weak side at first, then comes through with a strong candy corn note, follows up with hints of vanilla. That candy corn note is an indicator of a young whiskey, and this 90-proof bottle has no age statement, nor is it called "straight" bourbon which indicates a minimum of two years in the barrel. The taste is a lot of the same, a definite candy corn flavor with hints of vanilla, a bit of cinnamon, and a little maple-ish sweetness. It's really not a bad whiskey despite the candy corn descriptor, I can tell this is a well produced mash that just needs a little more time in the barrel, but that's the real catch-22 of a small distillery.

I suppose in some ways this Blind Tiger whiskey reminds me a bit of the LSU football team, good but not great. I think the folks at Chicago Distilling are on to something though, this mash bill could be terrific in a few years if they are saving some barrels for a good aged product. It hits all the right bourbon notes except the mellowing that can only come with time. Best of luck to them, best of luck to everyone out there in all your endeavors this year, and best of luck the Tigers this afternoon! Geaux Tigers!
Share