I know I’m a bit late to the party with my review of this beer. After I received these from my good friend Buddy Etheridge things got pretty busy here at Bite and Booze HQ. Then I was attacked by the vicious flu not once, but TWICE which put me and my taste buds out of commision for about a month. Now that I’m back from what felt like the grip of death I felt the time to break out my 4-pack of Attacus Atlas from Parish Brewing had come. 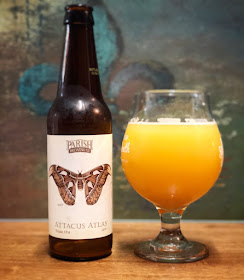 This Triple IPA is packed with a crazy amount of Galaxy hops and Idaho 7, a fairly new hop that was released in 2015, to counter the amount they had to use to get the high 9% ABV. Honestly, I didn’t get a lot of booziness from it as I expected but I’m sure after a few of these it would creep up on you.

Attacus Atlas pours a nice yellow/orange mimosa-esque hue which is pretty much what most of the juicy IPA’s tend to look like, at least to me. The aroma is a mild mix of orange and mango, but my nose still may not be 100% yet. Taste wise the hop juice hits you right off the bat in a big way. The citrus notes come in nice and smooth with a bit of creaminess. There was some bitterness on the finish but to me it’s very mild.

Once again Parish knocks it out of the park with another strong entry into their ever growing hop portfolio. I’m glad my taste buds were able to get back to normal so I could truly enjoy this beer. Let’s all hope this one shows itself more often.
Share