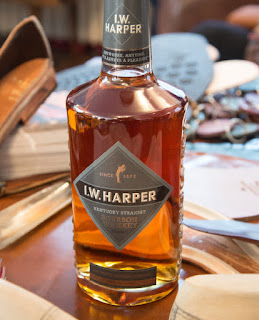 Good morning everyone, and welcome to an unfortunately Saints-less Super Bowl Sunday.  I was really hoping to be drinking this morning in support of the Black and Gold, but I guess I'll just raise an early morning toast to football as a whole. I honestly don't know who I'm going to be cheering for this evening... I'm not partial to either team, I don't have some sort of irrational hatred of the Patriots, I don't have any affinity for the Eagles... so I guess I'll just be hoping for some thrilling football.  The best way to start off a day of thrilling football?  How about a hopefully thrilling glass of wakey whiskey?

This morning I raided the Bite and Booze whiskey stash and found a media sample of an I. W. Harper Kentucky Straight Bourbon Whiskey.  This sample was bottled at 82 proof, and upon a little research is one of two I. W. Harper bourbons on the US market, the other being a 15-year aged variety of the same base mash.  Personally, I had never heard of I. W. Harper, so off to the Google I go... and it turns out this brand has been around since the 1870s, created by German immigrant Isaac Wolfe Bernheim.  He ended up settling in the Louisville area and started a distillery creating the I. W. Harper (thoughts are he changed the last name for marketing reasons) brand.  Currently the name is owned by Diageo, and the whiskey is still produced at the I. W. Bernheim distillery in Louisville (a more modern version of, at least) before being aged at the Stitzel-Weller facility, then bottled at a Diageo facility in Tennessee that is associated with George Dickel, another Diageo brand.  For some time this brand focused on foreign markets, particularly Japan, but in 2015 I. W. Harper was brought back to the American market.

Okay, enough history, how about the whiskey, right?  As for the color, I'm looking at a mid-range amber, not richly deep bordering on ruby red like the recent Super Blue Blood Moon, but not as light as straw either.  The nose is innocent and inoffensive, with hints of honeysuckle, a bit of vanilla, and a fructose sweetness from the corn in the mash.  There's nothing bad here, but nothing that really gets me excited either.  On to the palate, my first impression is that the body is a little on the light side, maybe this could have been cut down a little less and bottles at 90-100 proof instead of 82?  The ethanol flavors are pretty strong in this one despite the low proof, and there is a lack of complexity on the tongue, with a bit of oak, and a stronger dash of licorice.  All in all, a fairly forgettable whiskey, unfortunately. 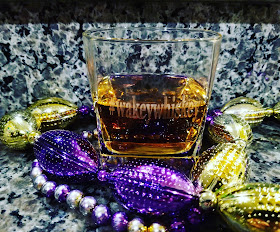 And on that note, let us all hope that this is not a forgettable Super Bowl.  I'm not a fan of either team, so I just want to see some good football!  Cheers!