Potatoes Au Gratin are always fun to create because of the layering. The Freret Beer Room in New Orleans was my inspiration for this dish. They serve it as a side, but it’s massive! For me, it had the perfect amount of gruyere cheese. My mouth is watering just thinking about it! For this recipe, I used manchego cheese instead of gruyere fora little extra bite and added Jay D’s Molasses Mustard to tied together the sweetness and add a little tanginess to the dish. 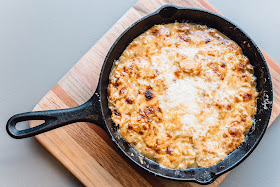 Preheat oven to 400°F. In a small skillet, sauté leeks and garlic until fragrant. Put one layer of potatoes around the bottom of cast iron skillet. Then pour ¼ cup of heavy cream over potatoes. Next, sprinkle small handful of leek/garlic mixture and 1 cup of manchego cheese over potatoes. Place another layer of parsnips on top of cheese. Sprinkle another small handful of leeks and 1 cup of manchego cheese over parsnips. Pour the other ½ cup of heavy cream on top of parsnip layer. Make another potato layer, then sprinkle leeks/garlic and ½ cup of Manchego cheese on top. Take the Molasses Mustard and drizzle on top, then sprinkle remaining leeks/garlic and ½ cup of gruyere cheese. Press down on the au gratin so that all of the layers are compacted. Cover skillet with foil and bake for 20 minutes. Take foil off and continue baking until cheese is bubbly and golden brown. Allow to cool for 5 minutes before chowing down.
Share