Friendsgiving came and went, but the memories will last forever yet again. I'd like to start by giving Sara and Rachel a heartfelt shout out for hosting such a fine evening of wine and Thanksgiving-style cuisine. Our third annual Friendsgiving took place this past Wednesday and certainly lived up to all the hype and anticipation!  I brought scallops topped with bacon and a home made pear and bourbon reduction chutney for an appetizer as well as a side of asparagus for the feasting.  In addition, I also threw in a bottle of Suisun Valley's Scholium Project Syrah, which is quite tasty!
Sara and Rachel set up a couple old Third Row tables in their living room to give us enough dining space for the 16+ guests that showed up for Friendsgiving.  They did a fabulous job setting the table to dazzle the diners both before we sat down and after! 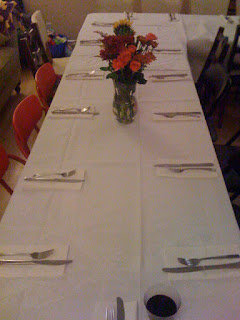 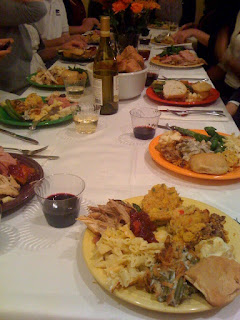 Friendsgiving Dinner Table Before and After We Were Seated
We served the food buffet style and then took our seats at the table.  I was fortunate enough to grab the end of the table with a little extra elbow room!  Our end of the table was certainly the "classy side" as I was joined by Eric, Teal, Hunter, Rachel Smith, and Chris. 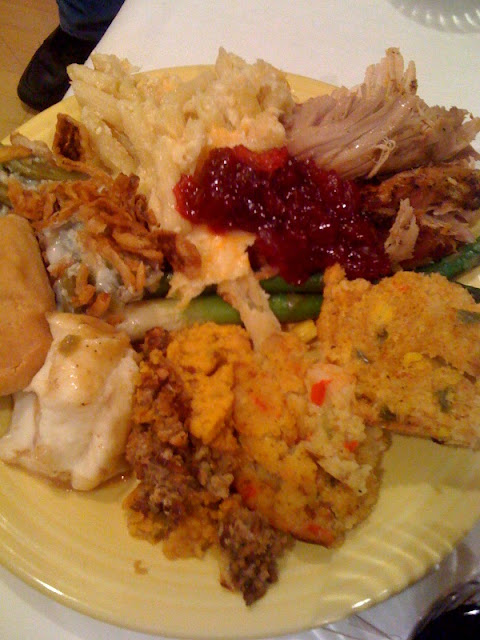 My First Plate at the Freindsgiving Feast of 2009
I'm going to attempt to go around the plate in order and give credit where I can and where it is due.  Starting on the bottom center we have Teal's cornbread dressing with shrimp and crab meat.  It is a great place to start because it was delicious!  I'm not sure I'lve ever had cornbread dressing that had such a perfect combination of moistness and flavor.  Well done, Teal!  Moving clockwise to the left sits the sweet potato casserole topped with candied pecans.  Money!  Next is a special tradition from Hunter Brown: mashed potatoes and gravy from Popeyes Famous Chicken and Biscuits!  It is hard to do better, so why try, right HB?  To the far left there is part of a roll.  Above that there is a great green bean casserole that was made by my sister, Dana.  The beans were moist and tender and covered in crispy onion strings.  The casserole impressed me, but not as much as Dana's other dish, the macaroni and cheese.  All the way at the top of the plate sits Dana's mac 'n' cheese which used multiple cheese varieties and some penne pasta noodles.  Way to go, sister!  Next, we have the turkey.  Eric made the turkey again this year and did another marvelous job with the large bird.  It came out of the oven about as tender and moist as one could ask for with plenty of flavor.  I'm a big fan of the dark meat, so my plate contained mostly leg and thigh meat with some home made cranberry sauce.  There is some ham that Rachel Stich cooked under there somewhere too.  To finish the plate off there are a couple asparagus spears that I cooked under there somewhere and another cornbread dressing at the bottom right of the picture.  Whew!  I got through all that.  How did I go back for another round?  I must be a machine.  Just call me Jaybert Dujols,  the Albert "The Machine" Pujols of feasting. 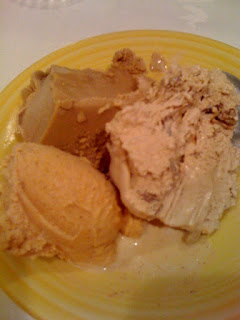 Three Home Made Ice Cream Flavors from Sara
There were plenty of desserts at Friendsgiving but ice cream was the only thing I still had room for.  Fortunately Sara had three flavors of home made ice cream to choose from.  On the right is the brown sugar and bacon ice cream!  The bacon flavor shined in the cream while not leaving too much of the taste in your mouth afterwards.  My only complaint would be that there were actually chunks of bacon mixed in the ice cream that tasted fine but messed up the texture of the creamy goodness.  On the top left there is a coffee flavored ice cream which had a good taste that was not overpowering.  Beneath the darker brown coffee ice cream is the orange pumpkin ice cream.  It won my award for best ice cream of the night and I could definitely eat it again.  The ice cream had a smooth, rich flavor with the pumpkin and spices that make pumpkin pie so good... but in an ice cream.  Thanks Sara! How cool would it be to serve coffee ice cream in photo mugs with our favorite group pictures?
Happy Friendsgiving, everyone!  Eat, drink, and be merry!  'Tis the season, afterall.