There are two ways to travel.  The first option is to plan everything out, be sure of all the details, buy all your tickets and passes ahead of time, and stress out when anything veers off course.  The second kind of traveler does not make plans that are set in stone, chooses not to worry about minor details, does not purchase anything ahead of time, and enjoys going wherever the wind blows, even if it might be unexpected and off the beaten path.  I, obviously, am the second kind.  I hadn't planned on a night in Las Vegas after my trip to San Francisco but, that being said, I certainly did not complain about it!

After leaving San Francisco, Eusebio and I flew out of Oakland to Las Vegas where we were supposed to catch a flight an hour later to New Orleans.  The problem occured because we were flying stand-by and the flight was already overbooked.  We basically didn't have a chance to catch that flight to New Orleans, which happened to be the final flight of the day, so we were stuck in Vegas for the night.  Oops!

I pulled out the laptop and used Kayak.com to find a cheap hotel room in Las Vegas.  If you are a fan of Priceline, Hotels.com, Expedia, Travelocity, or Orbitz, you need to try Kayak.  It searches all of them for you at once and compares the prices!  Apparently it isn't very hard to find a cheap room in Vegas on a random Sunday night in November!  We booked a room at the Excalibur hotel and casino for a whopping $31 and carried on with our business.  Our checked bags were already on their way to New Orleans so we took our carry ons, got in a shuttle to The Strip, and started reciting quotes from Swingers such as "Vegas Baby, Vegas!" and "You're so money".  What a great film.

We checked into Excalibur and found ourselves with a renewed energy and substantial hunger.  After doing a quick internet and Urbanspoon search, there was one obvious choice for us within walking distance and affordable price range: Hubert Keller's Burger Bar at Mandalay Bay! 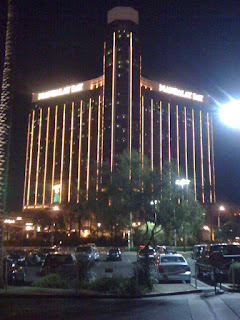 Everything in Vegas is built on such a grand scale that it is really hard to describe what it is like to walk around all the glorious hotels and casinos on The Strip.  Mandalay Bay stands tall among the casinos with its iconic building inviting patrons into its massive wings.  Each individual casino exists as a city in itself with more to do than one could find in most entire American towns.  Nestled inside the walls of Mandalay Bay sits the Burger Bar, where Eusebio and I stopped in for a bite and booze. 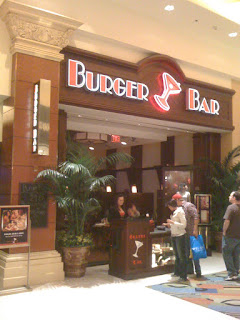 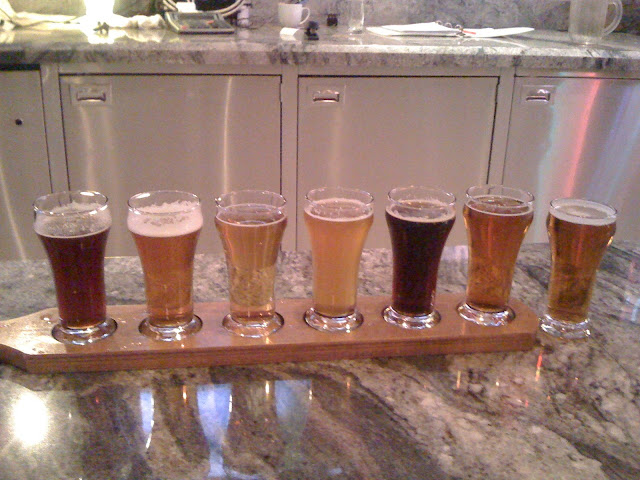 My Beer Selection at the Burger Bar

We took a seat at the bar and ordered samplers of splendid suds.  From left to right, my beer choices included: Bitch Creek ESB, Dogfish Head 90 Min IPA, Primo Premium Hawaiian Lager, Pyramid Snow Cap, Sin City Amber Lager, Monsoon Double IPA, and New Belgium 2 Below.  Every single brew tasted terrific on my lips and quenched my thirst with great glee.  The Dogfish Head 90 Min IPA and the Monsoon Double IPA stood out from the rest with their tremendous hops and fantastic flavor.  They were true IPA lover's beers, and I enjoyed every drop! 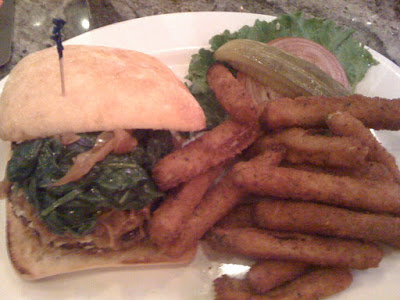 I went ahead and ordered the chef's namesake burger.  This feast on a bun came with a generous chunk of ground buffalo, caramelized onions, baby spinach, and blue cheese on a ciabatta bun.  Every bite that entered my mouth contained the juicy and savory buffalo meat with an incredible accompaniment of fixings.  Hubert Keller did well!  I got my burger served with some zucchini fries that needed no condiment to dress them up as they were crispy and delicious all by their lonesome. 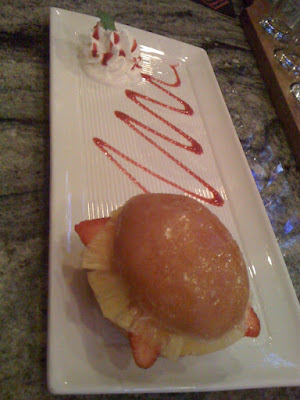 Eusebio splurged on the signature burger with 100% Kobe beef, truffles, and foie gras which also came with a free dessert.  I'm sure he'll post about his burger and dessert on Chef Thinks, so I'll just explain the dessert burger and move on.  The creamy cheesecake burger consisted of a warm donut sliced in half and filled with cheesecake, caramelized pineapple, and strawberries.  It wasn't good at all.  That was sarcasm.  That wasn't sarcasm. 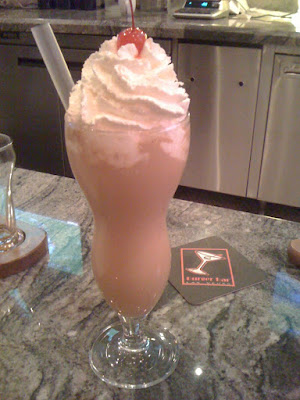 Custom Made Milk Shake at the Burger Bar

Knowing that the Burger Bar's milk shakes are nearly as famous as their burgers themselves, I ordered one for my dessert.  My custom milk shake included vanilla ice cream with peanut butter, hot fudge, and, of course, Maker's Mark bourbon!  If you've ever seen Pulp Fiction, then you know about a $5 dollar milk shake that doesn't have any bourbon in it or anything.  In front of me stood a real milkshake, made with bourbon, that was worth every penny... though it certainly cost me more than the $5 that Travolta complained about!

After the Burger Bar, Eusebio and I made one more stop in Mandalay Bay before retreating back to Excalibur for the night.  We stopped by the Minus 5 Ice Lounge for some cocktails in a bar made completely out of ice.  Even our glasses were made out of ice, so the drinks were sure to stay cold!  The Minus 5 experience made it worth going once, but the entire thing was certainly there for the tourists.  But Hell, it is Vegas, and I was, in fact, a tourist.  So I enjoyed my cocktails, got some pictures with a chick in a penguin suit, and had a good time with it all.  The place really did create an interesting environment and a unique setting, which I'm all about. 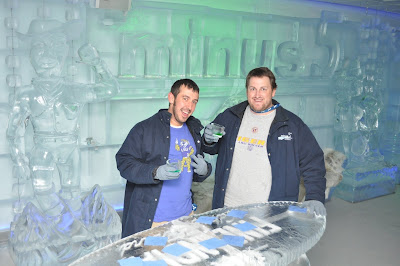 Eusebio and Jay in the Minus 5 Ice Lounge, Mandalay Bay, Las Vegas 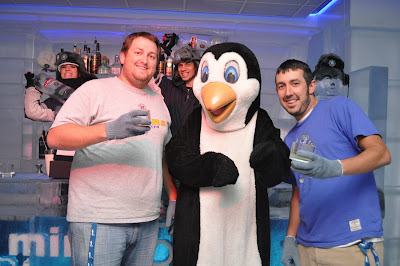 Jay, a penguin, and Eusebio in the Minus 5 Ice Lounge

The next morning we had a little more drama with catching a flight back to New Orleans with a freak November hurricane bearing down on the Gulf Coast and flights still full from the day before.  However, this time were able to snag two of the last available seats on a plane so we made our way back to Cajun country a day late, a few dollars short, and with a weekend full of delicious food, plentiful drinks, and fond memories that wont soon be forgotten!