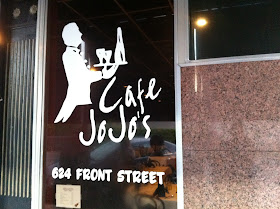 On a recent trip to the Louisiana Coast I had the pleasure of getting treated to a fantastic dinner at Cafe JoJo's in Morgan City.  The restaurant, which opened its doors in 2003, sits in downtown on the banks of the Atchafalaya River.  Fortunately the levee system saved them from most of the flooding after the Morganza Spillway opened this past summer.  Still reeling from the oil spill over a year ago, the Louisiana seafood industry is currently on a long path to recovery.  Morgan City was at the center of the storm, so to speak, during the whole fiasco.  With an ironically named "Shrimp and Petroleum Festival" as the city's largest annual event, it is easy to understand the strong ties of seafood and oil that bond the community.  I made commentary on the connection between Louisiana and Alaska in an earlier post based on seafood and oil, and thanks to Exxon and BP, the coastal communities became even more connected in a tragic way. 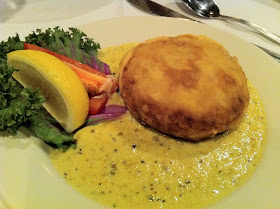 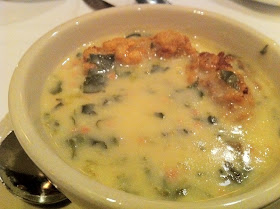 Course two saw an Oyster Rockefellar bisque.  While I admire the idea of turning a classic dish into a soup, this happened to be the only course that didn't overly satisfy me.  The fried oysters in the creamy bisque felt out of place and left an odd texture.  However, the flavor of the soup still had me eating the entire cup.  Maybe I'm just a fat ass. 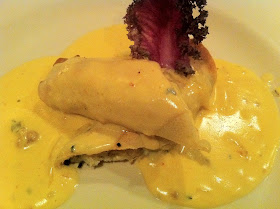 The Cafe JoJo's staff brought out the third course.  A delicious seafood crepe came out loaded with shrimp and crab and smothered in an amazing buttery, creamy herb sauce.  I gobbled the crepes up in record time.  They had a great savoriness to match the sweetness of the seafood. 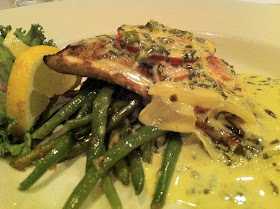 By the time the fourth course came out almost everybody at the table had already gotten full.  Not me.  I knew what I had in store and I got my second stomach ready.  The main entree featured a grilled Louisiana redfish filet with green beans topped with an intoxicating pesto-chardonnay sauce.  The dish is one that I'd love to recreate at some point.  While the meal as a whole just continued to get heavier and heavier with butters and creams, this dish and this sauce stood out on their own.  I loved every bite of it and needed extra bread to soak up the sauce that remained abandoned on my plate. 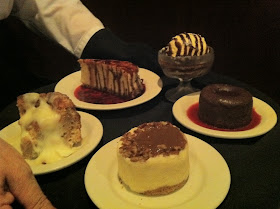 And naturally, no meal is complete without dessert.  I tasted the turtle cheesecake (front and center), the bread pudding (far left), and my favorite, the homemade Chantilly cream (top right).  The cream had a light fluffiness that ideal rounded out the heavy meal.  I managed to have a few bites before bringing the rest back to the hotel with me.  All in all, Cafe JoJo's served up an outstanding and memorable meal, and I'd be happy to return any time I dine in Morgan City.