Scallops are one of those foods that seems to be over-glamorized by food based television shows... particularly those with celebrity chef Gordon Ramsay.  However, while they may mess a lot of people up on Hell's Kitchen, I knew that they really weren't that difficult.  The key to a properly seared scallop is the right amount of oil a very hot skillet.  After that, I suppose it's all about timing.  Emeril's recipe pairs the seared scallops with an interesting combination of cabbage, fingerling potatoes, apples, and golden raisins.  Bizarre... but it ended up being quite tasty! 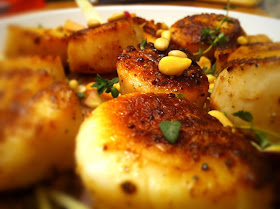 I picked up my ingredients for the recipe at Calandro's Supermarket.  There were a few steps involved such as boiling the potatoes with thyme, bay leaves, and peppercorns; soaking the raisins in apple cider; toasting some pine nuts to draw out some flavor; and searing the scallops to a beautiful golden brown in grape seed oil.  After that, I cooked down the cabbage in oil, wine, and Emeril's chicken stock.  Soon the raisins were added along with the apple and some more thyme. 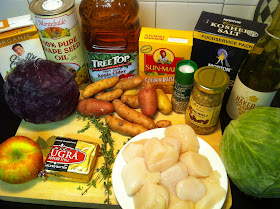 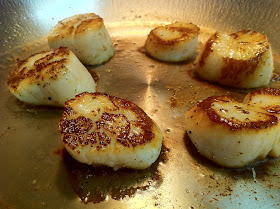 The final plating involved arranging the scallops over a bed of the cabbage, potato, apple and raisin mixture. Since I used some purple and green cabbage the dish really popped with color.  The toasted pine nuts were used as a garnish along with some fresh thyme just to add a little greenery. 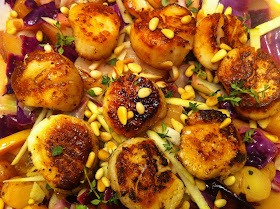 The "Seared Scallops with Savoy Cabbage, Fingerling Potatoes, Pink Ladies, and Sultanas" from Emeril's new book Sizzling Skillets and Other One-Pot Wonders ended up being one of the most interesting recipes I've ever cooked.  It seemed odd yet somehow really worked.  I was amazed at how well the flavors and textures worked together.  Plus, this truly ended up being and extremely healthy meal.  While I'm not known for such things, it is always good to get such great depth of flavor in a dish that at least isn't terrible for you!  Oh, and the scallops were amazing.  Apparently I can sear scallops fairly well.  Kosher salt, fresh ground white pepper and grape seed oil.  That's it.  Bon Apetit.
Share