Toasted Pecan and Parmesan Quinoa plus a Giveaway! 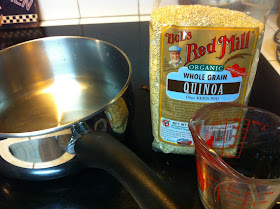 As part of the Bob's Red Mill and California Olive Ranch Healthy 2012 Challenge with the Virtual Potluck team, one of our missions was to create a side item using a whole grain and a olive oil.  I decided to further the challenge by only using ingredients that I already at home instead of going out shopping for more.  The quinoa seemed like a great choice for a side item, so I started there.  After getting two cups of water boiling I poured in one cup of quinoa along with a little salt.  That needed about 12 minutes to cook, so I then turned my attention to what else would go with the quinoa, which by itself is rather bland like most grains.  Fortunately I found some pecan halves and thought that the nutty flavor might go well with the quinoa.  I grabbed the olive oil and some smoked sea salt from the Red Stick Spice Company as well. 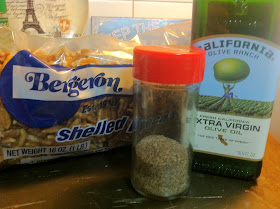 I mixed about a cup of the shelled pecans with two teaspoons of olive oil and one teaspoon of smoked sea salt.  After the pecans were well coated, I spread them out of a baking sheet and toasted them in the oven at around 350 degrees for approximately 10 minutes. 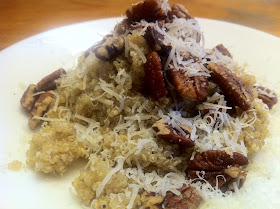 After a little more seasoning to finish up the quinoa, I threw the dish together.  I placed the toasted pecans atop the quinoa and then grated some fresh Parmesan cheese over the top.  The result ended up being quite satisfying, especially for my first attempt at quinoa!

Want some Bob's Red Mill grains and olive oil from the California Olive Ranch?  Read blow for the details about how you could win some!
Additional Entries: