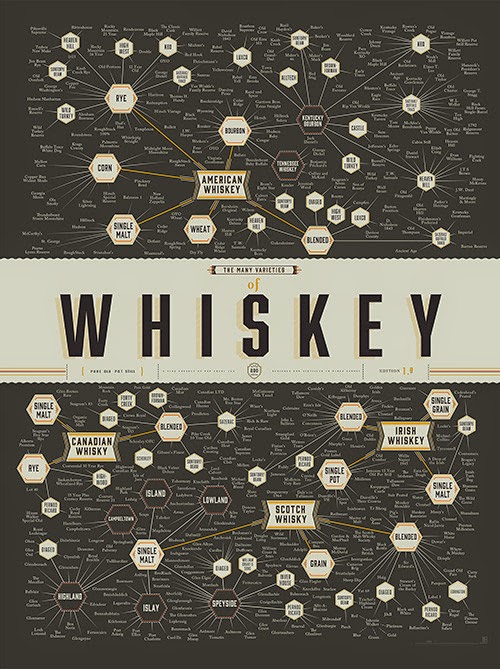 How well do you know your whiskey? If you're like me, the answer is pretty damn well. However, even that doesn't mean I know everything! The good folks over at Pop Chart Lab  created this whiskey chart that belongs on all of our walls. The Many Varieties of Whiskey shows whiskey by place on the globe, style, and brand. It is perhaps the most detailed whiskey chart I've ever seen including American whiskey, bourbon, Scotch, Irish, and Canadian whiskey, though still certainly not complete. But barring things like Japanese whisky and the most obscure brands that are really hard to keep up with in the grown whiskey world, this chart pretty much has it all.

Now the real question is which whiskey are you going to drink? And who is going to buy me one of the these posters? If you go the Pop Chart Lab site or click the poster you can get to a version of the chart which you can zoom in on. You can also buy them straight from Pop Chart Lab and shipments start today! Seriously, I wasn't kidding... I need one of these!

Whisk(e)y Wednesday is a blog post series on Bite and Booze sponsored by Calandro's Supermarket. Calandro's has one of Baton Rouge's best selections of bourbon, Scotch, Irish, and other whisk(e)ys as well as wine and craft beer. This WW feature was scored by Jay Ducote, Eric Ducote, and Jeremy Spikes. Scores are marked for Nose, Taste, Finish, and Balance and Complexity using our own proprietary scoring system. Marks are then added and averaged, leaving us with a final score out of a 100 point scale. Our scale should be looked at on the full range of 0-100 rather than an academic range where 70 is passing and anything less is failing. A 50 should be considered a very mediocre whisk(e)y (though not undrinkable) while anything below 20 is absolute horse piss and anything above 80 is rather extraordinary and anything above 90 is world class.
Share