Good morning everybody, I hope you are having a fantastic Friday so far, or whichever day you might be reading this, I hope it's awesome.  Today's Feature Beer Friday (Hashtag FeatureBeerFriday) comes from Southern Prohibition Brewing out of Hattiesburg, Mississippi.

Southern Prohibition (or SoPro) established in 2013 actually makes it one of Mississippi's oldest craft breweries. It wasn't too long ago that Mississippi was a black hole for craft breweries thanks to restrictive laws, but starting with Lazy Magnolia in 2005 the state has started to join the craft beer movement.  The group Raise Your Pints has done a lot to help in the legislature as well as the breweries themselves continuing to fight for their business. In the end, Mississippi is starting to catch up to the rest of the country, or at least the rest of the South, and that's without a doubt a great thing for craft beer drinkers in the region. 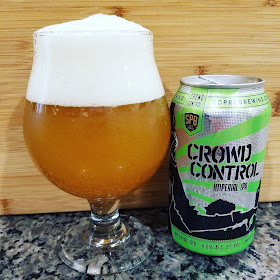 Enough history though, how about the present, and this Crowd Control Imperial IPA?  The pour is hazy, but not quite the juicy look of some "New England" styled hoppy brews. The color is a deep, opaque gold with a frothy white head and the hop aroma reached my nose before I was even done pouring.  The first thing I noted from the aroma is that this has a much more dank, piney, resiny scent than all of the juice bombs I've been drinking recently. The beer is hopped to feature Mosaic hops, which have a real tendency to give off a green onion flavor, but I'm not getting that as much as the resinous, traditionally bitter hop bite.

The taste is more complex, with the resin notes coming through strong and coating the tongue and a minimal sweetness in support.  The finish is bitter, but in an awesome way and completely different from the velvet smoothness of a real "soft" juicy IPA.  Even a minute after a sip there is some lingering hop bitterness, which makes me want to go back for another sip (or another can) to satisfy that craving for MORE HOPS! It's only 8% abv, so the lower side for an Imperial IPA, and not so strong that I can't go back for another, right?

SoPro has a real winner on their hands here and it has been a favorite pick of mine ever since cracking the Baton Rouge market.  If you see some out there, don't hesitate to give it a try.  Cheers!