Alright lads and lasses, it's St. Patrick's Day, which means it's time to throw on some green clothes, don some green beads, get some Irish beer and whiskey ready and head on down to your local parade.  Baton Rouge annually hosts one of the larger St. Patrick's Day parades in the country and this year it just happens that March 17th falls on a Saturday for some extra Irish charm.

I've rode in the parade many times, gone to watch many times, partaken in the overpass block party and without a doubt made an ass of myself more than once.  This year though, no revelry for me, as my newborn son is finally home from the NICU.  I hope everyone headed out to the parade has fun, but I'm still going to find time for a little wakey whiskey.

Bushmills claims to the the world's oldest whiskey distillery although that's based on a license granted in 1608 to distill whiskey in the county, and not based on registering the Bushmills brand itself, which happened in 1784 and would make it the 5th oldest whiskey brand in the world. Regardless, that's old-- That's even older than Chuck P, although not by much.

A little more Bushmills trivia:
The distillery isn't actually in the Republic of Ireland, but is instead in Northern Ireland as part of the United Kingdom. It's on the island of Ireland though, so it's Irish whiskey to me. 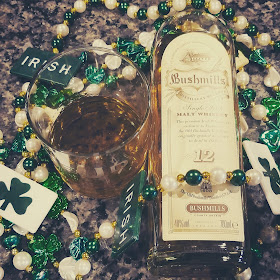 This particular brand is the 12-year Single Malt, which is comprised of barrels that are between 12 and 14 years old, and it's aged primarily sherry casks. The special thing about the 12-year is that it's only available at the distillery in County Antrim, and nowhere else.  This particular bottle is one that I've been saving in the cellar for quite a while, since a 2006 trip to Ireland in fact, so it's past time I took another pour or two.

I compared it to a regular bottle of Bushmills, and the 12-year is without a doubt a darker, deeper color with a rich honey tone to it.  The aroma is very floral, with notes of honeysuckle and vanilla, complex and strong.  The taste is amazing, in my opinion, with a hint of citrus to go with strong oak and vanilla and a little dark fruit as well.  I think the sherry casks used in the aging really add another layer to this on top of the standard oak notes and it blends together exceptionally well.  The finish is smooth with just a hint of booziness (it's bottled at a modest 40% abv) that doesn't linger nearly as long as the sherry notes.

I know this isn't one that you guys and gals can just go pick up off the shelf, but if you ever find yourself in Northern Ireland and swing by the Bushmills distillery, this is worth a pick up.  Happy St. Patrick's Day everyone, and sláinte!
Share