A Journey Across the River!!

While at the Baton Rouge Culinary Classic, Eusebio and I spoke to an older couple that RAVED about a place in Port Allen called the River Queen.  They talked about how great of an old-school, classic, greasy, shady burger joint it is and suggested that we make the trip.  For the next week or so I did a little research on food that is worth crossing the river for and decided that Eusebio and I needed to visit the River Queen Drive Inn and Pic-a-Pak Fried Chicken in Port Allen for lunch one day.

We journied across the Mighty Mississippi and took the first exit off the bridge that leads directly into the hub of Port Allen.  Very quickly we came across Pic-a-Pak Fried Chicken, so we stopped on in for a tasting. 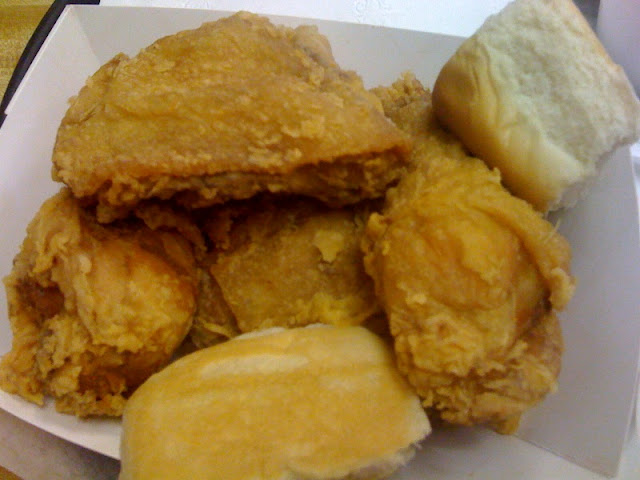 Both being fans of delicious dark meat (on chickens, no fowl comments please!), we ordered a four piece dark combo that came with a couple small sides.  We chose the baked beans and potato salad which were both rather ordinary.  On the other hand, the fried chicken was worth noting.  Crispy and flavorful on the outside, tender and juicy on the inside, this freshly fried chicken was fantastic.  I'm a big fan of fried chicken and love going to Popeye's whenever I feel like shaving a few more days off of my life.  Popeye's is definitely the only national fried chicken chain that I will eat at.  It can often be difficult to find a good fried chicken (and I don't mean chicken tender) at local establishments, but Pic-a-Pak does it right!  It was not spicy (which is what I love about Popeyes, if you get the mild I lose respect for you), but for what it lacked in spice it made up for in freshness and flavor.

We left Pic-a-Pak and went a block down the road to the River Queen Drive Inn.  Yes, it is supposed to be spelled with two "n"s.  I guess the second one fell off much like the second "e" in queen.  It was a wonderful establishment with an outdoor walk-up ordering window, outdoor seating, and a small indoor area with video poker machines.  The River Queen really seemed like a glorified concession stand, and we found out quickly that that is exactly what it is. 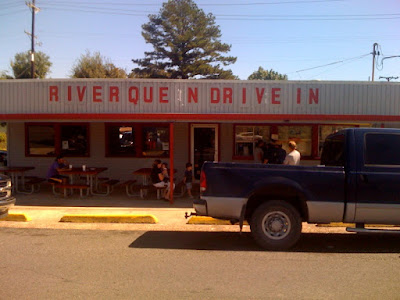 I haven't been more disappointed in something since I started this blog other than possibly when I was fed red beans out of a can.  I think the expectations were built up so high and then our baloon popped but the boy wasn't hiding in a box in the attic.  Basically, we were expecting fresh, hand-made, half pound or larger, greasy, juicy burgers.  What we got was a previously frozen flat-top fried 6 oz piece of cheap ground beef.  :(  There is my sad face.  Really, I could have gone to Sonic and gotten almost the same thing.  It is not like the burger was bad, it just was so far below what I was anticipating that I felt cheated.  If you want a burger in the Baton Rouge area, please, go to Roul's, Cory's, Downtown Seafood, Riverside Patty, or one of several other joints.  Do not cross the river to go to the River Queen Drive Inn.  But, if you happen to be across the river, you might as well stop at Pic-A-Pak Fried Chicken! 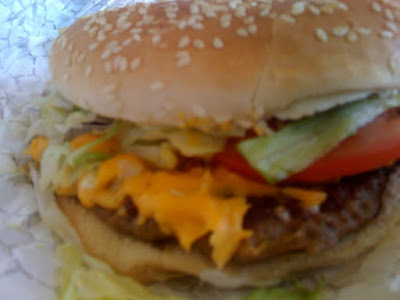 All in all the trip over the river was a success.  We capped the lunch off with some peach cobbler at the River Queen which was the best thing we ate along with the onion rings.  The curly Q fries were typical.  We learned something about Port Allen on that day.  Pic-a-Pak=good, River Queen=bad.  It was certainly worth crossing the bridge to find out.