The Man's Meal at the Marcantel's

I really love a traditional manly meal.  They take me back to my childhood days of cooking on open fires at hunting camps in south Texas with my father.  Most of my first memories of outdoor cooking, and certainly of grilling, come from those mesquite flames kissing the sizzling slabs of steak while foil-wrapped potatoes baked in the hot, glowing embers below.  Last week I was invited over to the Marcantel's residence where Paul recreated the man's meal and I just hung out and enjoyed the show.  I guess I did pitch in by creating the garlic-cayenne butter sauce for the corn, but we'll get to that later.  Brian and Michael joined in on the feast as well as Michael's newly born son, Levi, and Pam and David Marcantel, Paul's in-laws.

The potatoes were wrapped in foil and baked in the oven at a high temperature, the fresh ears of corn were shucked and placed on the grill, and beautiful slabs of raw beef were brilliantly seasoned by Paul and thrown on the pit to sear until reaching a medium-rare temperature. 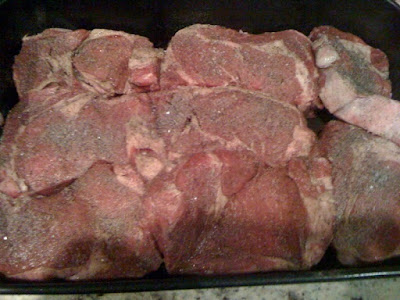 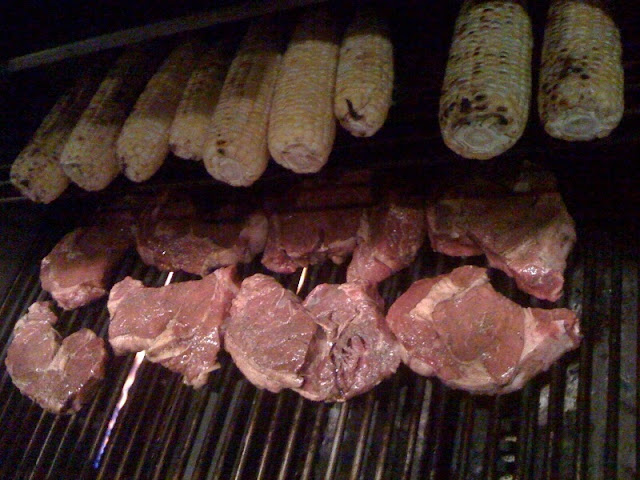 Corn on the Cob and Steaks on the Grill

The corn was allowed to heat on the top rack of the grill for a while and was rotated at key intervals.  Paul likes to get a little bit of char on his corn so that the starches caramelize and the natural sweetness comes out a little more which is a fine way to do it, if you ask me.  When the corn was eventually moved to the bottom to give it a nice scalding, it was also coated with a garlic-cayenne butter sauce that I created out of nothing but butter, cayenne pepper, and garlic salt (credit goes to Courtney Holbrook for the idea).  It was about as simple as it gets, and mighty delicious on an ear of corn! 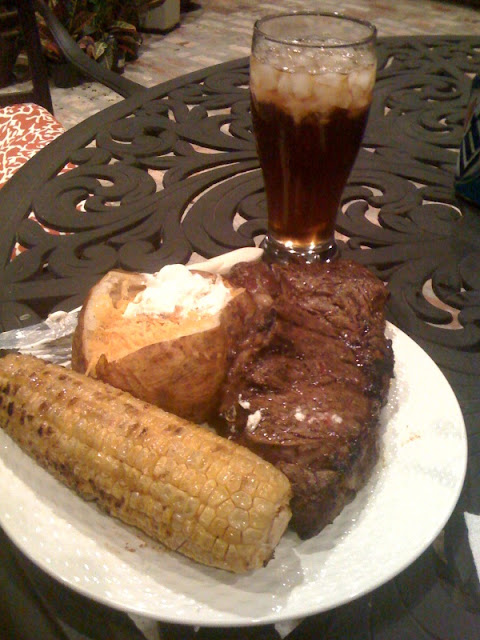 Man's Meal: Loaded Baked Potato, Garlic-Cayenne Ear of Corn, Medium Rare Rib Eye, and a Cold Glass of Sweet Tea (I had to rest my liver for a day)

The final meal was spectacular.  The loaded baked potato featured butter, sour cream, and cheese with a little salt and pepper.  The garlic-cayenne ear of corn came out perfectly seasoned and extremely flavorful.  It had just right amount kick to make your lips tingle while the sweetness of the caramelized corn kernels danced a tango on the tongue.  The steak was cooked to a perfect temperature with a warm red center that was tender and juicy throughout.  It was the kind of meat that needs no other topping or sauces and should be enjoyed for the flavorful piece of beef that is.  In the end, I left the Marcantel's house full, satisfied, and absolutely delighted to have eaten such a fabulous man's meal that both brought me back to my childhood and made me appreciate the food and friends of today.  Happy Eating!