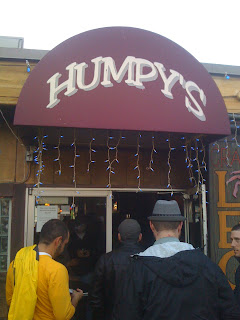 Day number one in Alaska.  We arrived at the Anchorage airport at 7 pm Alaska time.  I had woken up at 4 am Eastern time, so in all reality my sense of time seemed a little messed up.  At 4:30 am I caught a cab from the conference center north of DC to the Reagan airport.  From there my flight was delayed to Charlotte, but we made it eventually and I then stayed on the plane into Houston. At IAH I met Matt and Gary for our flight to Anchorage.  Matt barely made it in time, but we all made it on the plane and seven hours later (and quite a few Jack Daniels beverages) we found ourselves in Alaska.

Our flight made it in about ten minutes before Brent, Eusebio, and Eric.  Jason wouldn't meet us until later.  Anders and Kristen came and picked us up from the airport. Life in Alaska was great already. 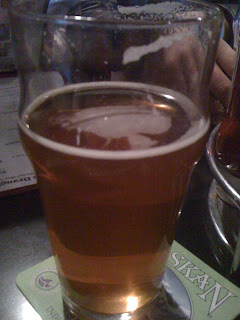 After settling in at Anders and Kristen's place, the time quickly came to leave the house and head downtown.  We descended on Humpy's with a lot to prove.  Most of all, we had beer to drink.  Humpy's calls themselves the Great Alaskan Alehouse, and I'm not one to argue.  The place rang with excitement on this Saturday evening.  Before us stood the most beers on tap in one location in all of Alaska.  They had a great selection of Alaskan craft beers as well as some good brew from the Pacific Northwest of the lower 48 and some awesome international stuff as well.  I began my night with a Moose Tooth Polar Pale while we chatted with some locals and waited on a table.  The beer had a light feeling and a nice balance of malt and hops.  It was a fine beer to start the day with.  Soon we had a table and began looking over the menu.  Three of us previously agreed to attempt the Kodiak Arrest Challenge that we watched Adam Richman complete on Man vs. Food.  We thought we had a chance and wanted to give it a try, even if it would nearly ruin our night.  However, sitting there and seeing the $124.99 price tag, we had second thoughts due to the cost.  For a brief moment, all three of us backed out and decided to just order something off the menu.  Our rational thinking led us to conclude that we probably couldn't finish, it costs too much money, and we'd be miserable for the rest of the night.  Then emotion took over.  I looked over the menu and there was nothing that I wanted to try more than the challenge.  Gary restated his decision to not attempt the challenge, but Eusebio and I tacked our sails.  We had come to attempt this gastronomic feat, and we'd be damned if we let ourselves back out at the moment of truth.  I loosened my belt, got my mind focused, and told the waiter that Eusebio and I each wanted to tackle the Kodiak Arrest Challenge!  For an introduction, watch the video below:

The Kodiak Arrest Challenge is a feasting competition of Alaskan proportions.  It starts with 3 lbs of Alaskan King Crab legs.  Listed on the menu at $34.99 per pound, the Challenge is almost worth its price right there.  After the crab, the platter is loaded with a foot-and-a-half-long link of reindeer sausage, seven salmon or crab cakes, mashed potatoes or fried rice, and mixed vegetables.  At the end there is also a berry crisp dessert served with ice cream.  All together, the food weighs six pounds and must be consumed in 90 minutes or less.  We had our work cut out for us!  Now for a pictorial journey: 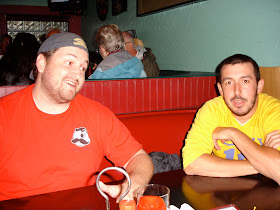 Jay and Eusebio were in a good mood before the Kodiak Arrest Challenge arrived at their table. 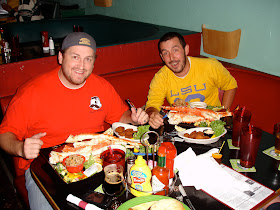 Upon seeing their meal, they got even more excited.  At this point everything seemed fun. 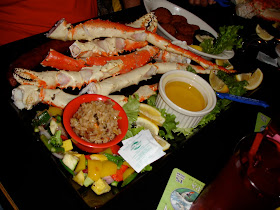 The Kodiak Arrest Challenge awaited my first taste and the start of the 90 minute timer. 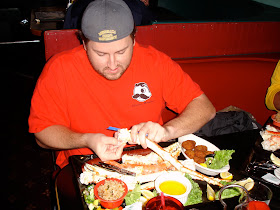 These fresh Alaskan King Crabs were rich with flavor and absolutely delicious! 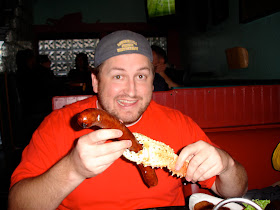 Early on I was in plenty good enough spirits to play with my food!  Reindeer Sausage vs Crab Claw! Time had come to get down to business.  I started fast and furious with my eating. 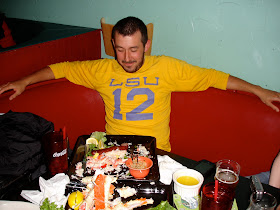 Eusebio felt the pain of the enormous challenge.  He gave it a strong effort but in the end couldn't stomach it. 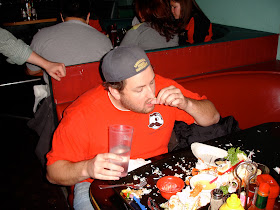 Meanwhile, I struggled over the last 45 minutes of the challenge, having to use water to help me swallow. 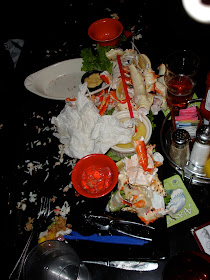 However, at the 90 minute mark, I completed the challenge!  A happy plate did not equal a happy Jay.  Still, this challenge provides absolutely amazing food.  The Alaskan King Crab is worth every penny.  The rich and flavorful crab is bright red and loaded with excellence.  The reindeer sausage also tasted fantastic before I let it sit on my plate too long and get cold.  I absolutely feel like I got my money's worth out of the challenge, but at the same time I wouldn't call the end of it a pleasureful culinary experience.  Even still, the taste of the food and satisfaction of the victory were much greater than the pain in my stomach! 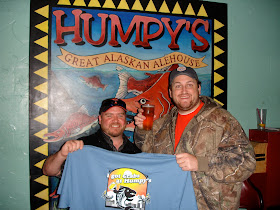 After a bit of recovery time, Shawn (the manager) bought me a beer and gave me a t-shirt to celebrate the victory.  The crew at Humpy's let me know that I was only the fifth person ever to complete the challenge, and that I'd be going up on their soon to be erected "Wall of Fame!"  I'll be proud to wear my "I got Crabs at Humpy's" shirt all over Louisiana. 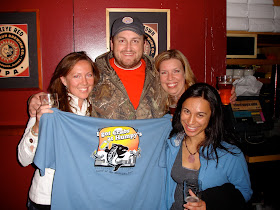 Word spread around the alehouse and before long I was a temporary celebrity.  Ladies stopped to take pictures with me.  I had become a legend in 90 minutes, and now I will live forever in the history books as a winner of the Humpy's Kodiak Arrest Challenge in Anchorage, Alaska!
Thanks to Eric of the Baton Rouge Beer Scene for taking all the pictures!