Last Call Food Brawl airs from New Orleans, and I'm one of the judges! 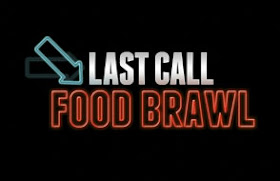 I announced on Facebook a week ago that Monday, June 10th, would be a huge day in TV land.  I made a post last Friday about The Freshman Class that will be airing tonight on The Cooking Channel.  In addition, earlier this year a show called Last Call Food Brawl filmed in New Orleans.  I had the pleasure of serving as a judge for the burger battle of late-night food glory.  Tonight it airs at 9 PM Central Time on a channel called Destination America that is part of the Discovery family.  For those in Baton Rouge, it is on Cox channel 1102 in HD.  I know it is on U-Verse as well, and I'm sure on Direct TV.  Just looks for DEST or DAM on your channel guides!

The show bills itself as the perfect recipe for a night cap: one part hungry bar-goers, two parts finger-lickin’ food, a dash of the country’s best chefs, with a Golden Fry Basket to garnish. It all adds up to a mouth-watering plateful of Destination America’s newest competition series, LAST CALL FOOD BRAWL, hosted by Adam Gertler, a runner-up for Next Food Network Star and all-around food enthusiast.

Each episode visits a different American city to challenge four chefs, hailing from 24-hour diners to 4-star establishments, in a cook-off to determine who will be crowned the king of late night bites. The food brawls attract a raucous audience hungry for munchies that are salty and sweet, like deep fried bacon chili cheeseburger rolls and peanut butter s'more french toast balls.

LAST CALL FOOD BRAWL heads to some of the biggest party cities in the U.S. to indulge in each town’s local flavor, including New Orleans, Austin, Memphis, Nashville and Atlanta. Each week, only one chef will win the coveted Golden Fry Basket and the title of King of Late Night!

So look for it tonight on Destination America and see me in action judging burgers!  It ought to be a lot of fun!
Share